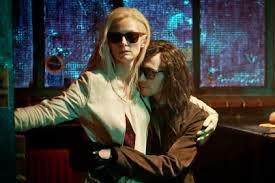 Any film by Jim Jarmusch (director and screenplay writer in this) is a must-see in my books. They are so infrequent anyway and nearly always worth the wait.

This is a vampire tale, very gently paced, in all-nocturnal settings - and not at all scary. It isn't intended to be. (There is only one single fleeting shot of anything approaching 'grisly').

Tilda Swinton and Tom Hiddleston are blood-sucking lovers in a long term relationship - actually straddling several centuries! He, in Detroit, keeps a store of illicitly purchased blood supplies from a local hospital through a corrupt researcher. His abiding interest is in composing and jealously guarding his music (a sort of electro-heavy rock) produced through synthesisers and musical instruments of all types and periods, and allowing only his lover to hear them.
The story starts with her in Tangier, where John Hurt makes an appearance as another vampire, Kit Marlowe (yes, the very same!) who, it transpires, actually did write the entire Shakespeare canon. She then travels to Detroit where she and her lover savour and imbibe their special 'beverage' like wine. Swinton's rebellious, spoilt brat of a sister, Mia Wasikowska (also a vamp), unexpectedly turns up and puts a spanner in the works though her uncontrollable appetite, after which Swinton and Hiddleston return to Tangiers in a state approaching desperation, meeting Marlowe once again. Throughout the film there's a bit of name-dropping of past literary luminaries with whom they've socialised.

It's an odd film which, though I didn't find at all dislikeable, I doubt will linger in the memory as some of Jarmusch's earlier films have done ('Down by Law', 'Stranger than Paradise', 'Mystery Train', 'Night on Earth', 'Coffee and Cigarettes'). He tends to point up idiosyncrasies in others while making them seem the most natural thing in the world. This film, on the other hand, is a very placid affair. Very little real drama actually happens. I reckon it's the kind of film which might be most effective when letting it wash over one while sipping at a glass of quality wine (red, of course!). Some of the darkly-lit visuals are quite eye-catching and in tune with the languorous pace of the story-telling.

Several of Jarmusch's earlier films lodged themselves in my memory on very first viewing, making me eager to want to watch them again. I don't think this one is in that category but time will tell. However, just a couple of hours after having seen it to the end, as at now I'll give this a...........................6.
Posted by Raybeard at 08:46