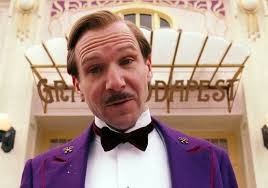 Wes Anderson is a director whose films have yet to endear themselves to me - and 'tis pity that this isn't the one to do it, though it did hold promise. The trailer looked most attractive.

No one could reasonably deny that the film is a feast for the eyes - sumptuous colours, carefully staged shots and impressively choreographed action - though most of it shot in square frame, this latter begging the question "Why so?"

It's told in flash-back by the present owner (F. Murray Abraham) of a super-palatial East European hotel, who started out as bell-boy (newcomer to feature films, Tony Revolori - rather good) to concierge Ralph Fiennes (perfect in this comedic role) in the 1930s. The list of celebrity appearances is as long as one's arm, all but one being quite easily recognisable, that one being Tilda Swinton, as a filthy-rich octogenarian, regular hotel guest in the briefest of all the cameo roles here. (I do have to confess that I did miss, until the final credits, that a certain character was Harvey Keitel.) There is a goodly number of what's becoming a 'Wes Anderson Repertory Company' here too.
Fiennes becomes, or wishes to ensure that he remains, chief beneficiary of the late aged lady's will, which involves purloining a valuable painting of hers into his possession. From there on it's a game of chase, police, prison, red herrings, subterfuge and disguises - all set against the backdrop of political change as WWII looms. At first his bell-boy is merely a menial servant to be kept 'unseen' as far as possible, but as the action develops the boy becomes his confidante and most faithful friend with a dog-like loyalty.

It's a tricky line between a film thinking that it's amusing and one that shows that it thinks it is. In my opinion this fell all too often on the wrong side of this delicate line. Of course all makers of a comedy hope that their finished product will be funny, otherwise they might just as well not have bothered. But in order to be effective it needs that expectation to be kept at arms length. Nothing kills a comedy quicker than one that acts as if it's one - and in this there's a lot of 'nudging and winking'. When I can see that there's an expectation that the audience ought to laugh my resistance to doing just that sets in - rather in the same way when I find music that tries to point one in a particular direction it makes me dig my heels in not to go there. (I ought to say that Mark Kermode, the BBC's top film critic, thought the film riotously funny, so my opinion may be in a minority - as it already seems to be, looking at the submissions so far on IMDb). However, to be fair, there were two or three moments when I did laugh, though that was certainly well below the quota for which Anderson and his team were clearly hoping.

As I said at the top, all of Anderson's films to date have by-passed my appreciation, which is odd because I'm a great lover of quirkiness, and his films can be guaranteed to display that quality in bucketfuls.
'Moonrise Kingdom' and 'The Aquatic Life of Steve Zissou' both left me largely cold. 'The Darjeeling Limited' was okay, I suppose. On the other hand, 'The Royal Tenenbaums' I really loathed with a passion. 'The Grand Budapest Hotel' was not dislikeable at all, though I also strangely felt no warmth towards it.
So, maybe worth a watch but, in my case, not one on which to have pinned my hopes on for significantly superior entertainment............................................6.