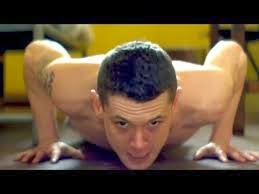 Emphatically not for those of a delicate constitution, this brutal prison-set drama makes me wonder when I last saw such  extreme and protracted screen violence.

In this David Mackenzie film, Jack O'Connell plays a teenager transferred from juvenile detention to adult prison (somewhere in England, though filmed in Northern Ireland) which is populated by inmates seemingly all banged up for murder or GBH, he owing his own presence here to having attacked a paedophile for unwanted advances.
The already tightly-coiled attitudes of the other prisoners meet their match in him as he doesn't just have a short fuse, his fuse is non-existent, liable at any moment to lash his fists out at anyone who challenges or sneers at him, this in a micro-world where every one is on the look-out for others who might display a lack of 'respect'. Scores have to be settled, sometimes with the help of conniving guards, and pecking-order rank has already been well established by the time he arrives. The big difference in this story is that one of the 'big guys' there who calls the shots happens to be his own convicted father (Ben Mendelsohn). Their interchanges are fraught with tension, the father caught between regard for his offspring and the need to maintain his status, which is being challenged by his son's arrival.
Even the 'classes' which the son attends (anger-management?) are taut with suspense, boiling over into physical mayhem at the slightest provocation, intended or not. The well-meaning but strugglingly-ineffective class monitor (Rupert Friend, particularly good), a member of staff employed from outside, finds it almost impossible to retain order for more than a minute or so.
The prison governor, trying to keep everything at arms-length regarding his own involvement, while striving to keep the inmates in check, is still not above taking the law into his own hands, most especially in a particularly shocking scene when the film is well advanced, when he loses all self-control.

There's very frequent use of the 'f' and 'c' words throughout, which is only to be expected. There's hardly any respite at all from the suspense as even the non-violent 'interludes' carry an expectation that a human explosion might go off at any time, which it does.
All the characters are very clearly delineated even if their back stories are not always fully explained. We know by hearsay and documentation the world in which they exist and that is basically all that is necessary to give the drama forward impetus.
It's set entirely and claustrophobically within prison walls with an all-male cast - save one or two background female warders plus the small role of a prison psychologist. I consider all the acting to be as fine as could be wished.

Until the last frames little of significant change occurs in the situation of the young inmate in this uniformly bleak film. Not one to watch if you're searching out comfortable viewing. I think some alcoholic beverage might help to get through the several bloody scenes without flinching, which I was doing all the time.