Film: 'UNDER THE SKIN' 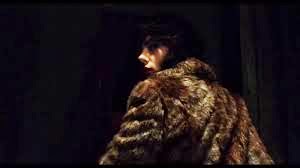 Despite being warned that an early scene featured a drowning dog, it was imperative that, by hook or by crook, I had to see this film. Verdicts to date have displayed a wide divergence between enthusiastic praise and loud raspberries, the former currently being in the majority. I'll say outright that, come December, it'll be surprising if this film isn't a strong contender for my 'Best Film of 2014'. (Btw: We see the aforementioned dog only very briefly and in long shot - and it's nowhere near the most troubling thing to occur in that particular scene.)

'Under the Skin' is not going to be enjoyed by those demanding explanations, answers neatly tying up the many loose ends, and all the dots joined. It's weird - in upper-case lettering!

An extra-terrestrial arrives on earth, in Glasgow of all places, and inhabits the human form of Scarlett Johannson. (And why not?). Having been set up by a mysterious motor cyclist, for unstated reasons she starts driving around the city in a transit van, mostly at night, stopping to ask directions from a number of lone, local, young men, going on to invite them into the vehicle, ostensibly to guide her driving route. But then she lures them back to her strange house (pitch black interior), with the implied promise of more, where she seductively strips off her clothes while they also divest expectantly. I can't say any more, but it's mighty unsettling.
During her encounters with these strangers she sports an English accent, while most of her quarry have broad Scottish ones, which I found not at all easy to understand - though with her superior alien faculties it's no problem for her to converse with them.
We see early on that she is capable of emoting when necessary, at least superficially. What she does lack, however, is any sense of empathy - clearly brought out by her cold, detached observation of the 'dog event' and its extremely disturbing aftermath.
The first part of the film stays in Glasgow, the camera playing on random pedestrians, in shopping malls, on the streets, unaware that they're being filmed, as though caught on CCTV. It's hard to be sure whether all her encounters (not all of whom she picks up) were real actors or just members of the public who just happened to be there at that particular time. This first half, I thought, was the stronger part of the film.
Then it locates to outside of the city where, paradoxically, the film's increased sure-footedness plays against the haphazard and unpredictable quality that made the first section so suspenseful. Though the level of tension is reduced marginally, the strangeness of the story remains as strong, compelling and as mystifying as ever.
Incidentally, for those who don't like them, I don't think there are any really jump-out-of-your-seat moments. The 'surprises' feel as though they've always been lurking below the surface, creepily insidiously into one's awareness rather than being in-your-face sudden shocks.

This is my type of film - one that haunts the memory, tantalises the brain, and is a fruitful subject for discussion for a very long time. It might all be dismissed as pretentious nonsense. It certainly seems slow-paced at times, though that only builds up the heavily brooding feel of it most effectively. The film provides a myriad of questions without eliciting a single answer. But it's fun, deeply thought-provoking and one of those rare events, a cinematic experience to enjoy with relish. An easily earned............................8