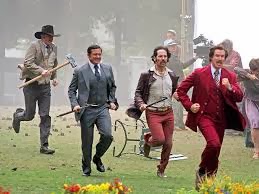 Well I can't deny that I did laugh a bit.

Will Ferrell, reprising his act as TV anchor Ron Burgundy, is fired from his job for gauche on-screen incompetencies while his co-presenter wife is promoted. He gets a chance to host a graveyard shift on a rival network's new 24-hour rollings news programme and he corrals three of his former workmate-buddies (Steve Carrell, Paul Rudd, David Koechner) to share in his opportunity and come up with ideas to make his programme a television sensation as well as to surpass the ratings of his cartoonishly arrogant and repellantly good-looking peak-time competitor.

Much of the 'humour' of this appeals to base instincts, often sexually crude or scatalogical with occasional slapstick - and including an infamous dinner scene in which Farrell, the only white man sitting round the table with a number of African Americans, can't control his tongue from mouthing stereotypical attitudes towards and assumptions of the latter. At least three of the reviews of this film I'm aware of considered this scene grossly racist-offensive in going much too far and being too prolonged. I have to confess that I did find a lot of it funny. (To my shame? Perhaps).

However, as with so many comedies, this film finds it can't sustain the laughs for its two-hour length, and runs out of steam about two-thirds through. In fact the aforementioned dinner scene also marked my own final chortles. There's no doubt it would have been a stronger film had it been shaved of the excesses of its final 30-40 minutes - and one knows they are clutching at straws when a handful of famous names appear (a number of them uncredited) as though to 'shore up' the enterprise. When they come on screen are we supposed to laugh at their participating in this enterprise or to be merely self-congratulatory amused at our own recognition of them? Whatever it is it does no favours to the film itself, smacking more of desperation than anything. All this plays simultaneously with the inevitable mawkish finale involving Burgundy's young son and estranged wife.

When I first went to see the original Anchorman film I was the only person who turned up, so, lacking a 'quorum', the cinema cancelled that particular showing, (At that time the name of Will Farrell was completely unknown in this country.) But I did attend a later one and I did find the original film not all that bad, perhaps a tiny bit lower than the level of this follow-on.
This film was reasonably well attended and I had the impression that the audience largely got its money's worth.
As I say, that did include me for just over half the film, but then once it started to slide there was no stopping it.........................5/10.
Posted by Raybeard at 23:28