Film: 'THE WOLF OF WALL STREET' 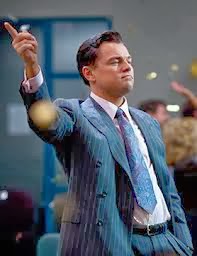 I didn't think this film was anything like as remarkable as some opinions had led me to believe. With Martin Scorsese's name to it most people, including me, would automatically sit up and pay attention. Without his name I think this film would quickly have been forgotten.

Between Leonardo DiCaprio's lead character's rocket-like ascendancy to the stratospheric heights of wealth (through stock market fraud and bribery) and his inevitable fall, the film's drama is curiously inert. The attenuated central section is a plateau of excess marked by frequent drug-taking and debauchery, in which unclothed female bodies are everywhere in evidence yet male participation is only cursorily depicted, if at all (and coyly at that) - all illustrated by flashy lights, quick jump-cuts and brash, pumping soundtrack, obviously reflecting the effects of the copiously ingested drugs. The absence of any arresting development is broken only by our witnessing the falling apart of DiCaprio's marriage, which is itself as predictable as ABC.
At a full three hours the film is too long by far. After DiCaprio, with his slick telephone sales technique, has recruited his handful of loathsome, bratpack young cronies, without a single redeeming feature among them, we quickly get the point, as his office expands into a hundred or so employees whose sole conscience is dependent on making more money for themselves and the firm, where nary a sentence can be uttered without the obligatory f-word - as well as (naturally) regular 'c/sucker's and a few 'fag(gots)'. After the 'boss' has reached his pinnacle of greed it's only a question of waiting to see how and when he gets his comeuppance. But it's a long wait - and a not especially interesting one at that. (Even when it eventually happens I was expecting he'd be punished with something rather more severe).
There's only a little bit of physical violence, once to the DiCaprio character's wife in long-shot and another, being the sole instance which results in the appearance of blood, is that inflicted on a marginal figure, the only character in the film who, significantly or otherwise, happens to be gay.

Comparisons with certain other films are plain. In terms of location, milieu and script it is not a million miles removed from 'Glengarry Glen Ross', which is also stuffed with many of the same 'cuss words'. I'm familiar with both the original stage play and the successfully expanded film version of 'Glengarry' and there's no doubt to my mind which is the superior in terms of drama, construction and screenplay - and it's not 'Wolf'.
DiCaprio's other recent equally frenetic offering was, of course, in the recent Laz Buhrmann version of 'The Great Gatsby' - and once again it's the latter which takes away the honours, not least because the ups and downs of F.Scott Fitzgerald's intensely interesting story is something to which this vapid film cannot hold a candle. And Buhrmann's direction is far more involving than Scorsese's approach of 'sit back and watch'.

I have to say that DiCaprio is really good here in 'Wolf'. Since the time he began to be noticed some 20 years ago I always regarded him as being a bit stiff, but here he shows himself in total command, displaying a range of which I never knew he was capable.
I didn't know any other of the actors (well, apart from Matthew McConaughey, who disappears not far into the film - and Joanna Lumley in a small role!) so I don't find it so easy to divorce them from the almost exclusively odious characters they are portraying.