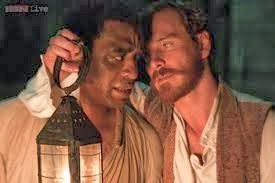 I approached seeing this film with considerable foreboding, having heard how gruelling are several of its scenes. My apprehension was well-placed. This is one of the most harrowing films I've ever seen. In fact, outside the horror genre, it could well be the most. At least with horror, even at its goriest, there comes a point where it becomes so ridiculous as to be laughable. Not so here, by a long chalk.

British director Steve McQueen has now begotten a consecutive trio of distressingly hard-to-watch films ('Hunger', 'Shame') - this latest one being the toughest to sit through.

'12 Years....' has just won the Golden Globe award for 'Best Drama', and I wouldn't argue with that. But as to it being in the classification of  'entertainment', that is hardly an appropriate word.

The ever-fine Chiwetel Ejiofor plays a well-connected, respected and comfortably well-off, New York husband and father who is tricked into visiting Washington under the pretext of displaying his violin-playing skills. There he is drugged, kidnapped and sold off as a slave, firstly to a half-sympathetic Benedict Cumberbatch, then to the cruel and sadistic Michael Fassbender with his equally scornful white foremen and his dismissive family who regard all their slaves as being their property to do with what they will. The kidnapped victim's protestations about who he actually is are contemptuously dismissed and he quickly learns that in order to survive his appalling situation he has to accept his imposed-on new identity, suppress his true feelings and try to stand apart from the horrific suffering around him. The internalising of emotions captured by lingering shots of his motionless face during unspeakable acts of savagery meted out to him and other slaves is extraordinary.

Throughout the film all colours are subdued with many scenes being dimly lit.
I don't wish to give away the vicious severity of incidents depicted, save to say that this film scored very high on the number of times I flinched or had to look away from the screen.
I saw Spielberg's 'Amistad' just the once when it was released in 1997, another film with a slavery scenario. Scenes from that film have haunted me for the last decade and a half. '12 Years a Slave' goes quite a way beyond that and I know that I will be unable to dismiss recollections of it for the remainder of my life. If such scenes were to be shown on TV I'd be changing channels - and I could only survive this one by telling myself that what's on screen is not real, even though the events depicted are based on reality as documented in Solomon Northup's (Ejiofor's character) own book.

I found all the cast remarkable. In the recent 'Golden Globe' awards the 'Best Actor' category was won by Matthew McConaughy for 'Dallas Buyers Club', a film which hasn't opened here yet. Having pipped Ejiofor, surely his closest rival for the award, I can only assume that McConaughy must have produced something truly astonishing, which I really look forward to seeing.
In '12 Years' it might be said that the appearance of Brad Pitt in a couple of late final scenes was distracting.  So it was, but it was a distraction I welcomed in helping bring me back to my own reality.

I don't seriously think that many people who see this film will afterwards just shrug their shoulders in 'so what?' style, consigning it to their memory banks along with all the other films they've seen. It does stand out, heart-breakingly so. If I'd had the choice I would have preferred not to have seen it, as the memory will linger with some pain. But there's no denying that it is a significant film, and for that reason should to be experienced by anyone who loves the medium of the cinema.