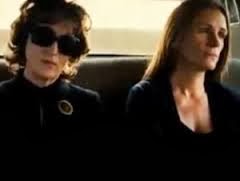 Taut and verbally dense family drama, with cast of familiar or very well-knowns, which held my attention throughout.
Not being familiar with the stage play on which this is based (screenplay here is also by playwright Tracy Letts) I came to this without preconceptions, which most of a typical cinema audience will also not possess, though I was aware that this was a substantially pared-down version of the theatre piece. (One critic on the radio said that in the theatre it plays for four hours, which may be true but I think there must be some element of exaggeration in that claim. This film is two hours long and it's not one minute excessive.) I also understand that on stage it all takes place within one room, which is here naturally opened up, though the substantial and lengthy quick-fire dialogues do betray its theatrical origins.

Meryl Streep, all guns blazing, is the (medication) pill-popping, cancer-suffering matriarch, dominating proceedings during a rare, if ever before, family get-together following a funeral. She and her daughters (Julia Roberts, Juliette Lewis and Julianna Nicholson  - I was unfamiliar with the last name) form a quartet whose bickerings about relationships and their respective pasts reach heights of bitchiness and spite which I've hardly seen on screen since 'Who's Afraid of V.W.?". One occasionally gets such scenes as a basis of comedy but not so often in straight dramas - and I loved it! Though it's the women who determine the contours of the story, present for much of the time and drawn into its tawdry contentions are Ewan McGregor, Benedict Cumberbatch and, like an anchor of sanity, Chris Cooper.
The big 'set-piece' is the post-funeral dinner in which stored-up and festering 'hometruths' (as seen from the speakers p.o.v.) come tumbling out at the slightest provocation, especially between the female family members, who say what they mean and what they really think, as though for the first time. Rather than clearing the air the revelations shift the family's dynamics big-style.
Meryl Streep delivers as only she can - and we've long since come to expect no less. But I was most surprised and impressed by Julia Roberts. I never knew she was capable of portraying such depths of emotion and wildness as she does, really letting her hair down when called for.

I believe that by reducing the original play's length the film's focus on the mother character has been amplified, and that in the theatre it's more of an equal-handed ensemble affair. But I can only judge it as a cinema piece.
I liked it a lot, with no serious reservations, and would happily sit though it again. I award it .................................7.5
Posted by Raybeard at 07:17