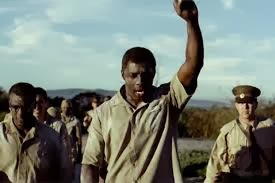 Following the very recent death of the man himself and the subsequent protracted lying-in-state, memorial service and  actual funeral, with all the saturation TV and radio coverage plus special tribute programmes, I still haven't quite got over 'Mandela fatigue'. So the opportunity to see this now was unfortunate timing. Still, duty called!

I knew this wasn't going to be a hagiography and thankfully, it's far from that, at least regarding his pre-prison life. (It's actually based on his own auto-biography). However, I'm not sure if it was my weariness of the subject matter (surely remarkable enough for being the subject of any film) that caused me to see this as being, by and large, rather flat. True, there are a number of short scenes of harrowing violence on the part both of the South African authorities and the ANC (largely shot in 'newsreel footage' style) but they didn't really tell this audience member anything of which he wasn't already aware. I would have thought that the same went for far younger viewers than myself. But I suppose these events had to be told somehow in order to illustrate the context of the story. They could hardly be omitted.

I wasn't familiar with a single name in the cast though I understand that some will be familiar to ardent TV viewers. Idris Elba does a sterling job in the title role. He got the voice very close though facially his resemblance to Mandela is less than slight. Additionally, he lacks the man's trademark radiant-sunshine smile - but how many others do have it?.
Naomie Harris does just as well playing Mandela's second wife, Winnie, transformed by her own months of imprisonment  from dutiful wife and mother into firebrand militant. Though she was by no means glossed over in this film I regretted that her part in it didn't merit greater focus. However, we do get to witness the couple's estrangement up to his time of release.

I was brought up with a bit of a jolt by Mandela being the object of scorn and contempt by the prison guards at the start of his Robben Island incarceration to his quite suddenly being regarded as a political leader with influence earning the respect of much the same officers. Of course the jump takes place over quite a number of years but I don't think it was handled very adroitly.

English director Justin Chadwick, whose work to date has been hugely dominated by television, ends this story when Mandela becomes South African President, which was fair enough, though predictable.

On the whole I thought the film was okay. It might have been my own exhaustion at seeing yet more of the central figure but I did leave the cinema feeling that he really deserved something rather more interesting than this offering which was only one step above being humdrum.....................................5.5.
Posted by Raybeard at 09:11