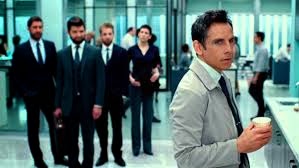 When I posted my 2013 Top Ten yesterday I took a gamble that this film wouldn't disturb that list. Well, it's just as well that I hadn't also posted a Bottom Ten!


Not being familiar with the Danny Kaye 1947 film nor with the James Thurber short story, and although I knew the basic idea of a fantasist regularly inhabiting his dream world, I had prepared myself for a gentle, even quite amusing, comedy peppered with whimsy. What I saw was a sporadically engaging (infrequently) romantic tale which didn't have to progress very far before being weighted down with cloying sentiment. Maybe my skewed and unfair expectations didn't give it the chance it needed. However, if I'd known what it was going to be I probably wouldn't have bothered going.

Ben Stiller (also directing) plays a hard-done-by character who works for 'Life' magazine, trying to attract the attentions of a female co-worker he's fallen for. Simultaneously the firm is on the edge of closure prescribed by a bearded trio of young executives, with prospects of mass redundancies. Meanwhile he's trying to save the day by searching for an elusive photographer who somehow holds a talismanic photo-negative of a picture he's required to produce for the magazine. (Don't ask. I got lost!) His search involves excursions to Greenland, Iceland (fabulous severe landscapes) and the Himalayas via Afghanistan - where the  mysterious photographer (Sean Penn) finally appears for one scene. Stiller's return is all sentiment with no laughs, which had started to fade out long before then anyway.
There are only a few excursions into fantasy, nearly all of which are towards the start of the film, and only a single one (a chase) being in any way engaging in its relative length and extravagance.
Also appearing in three briefish subdued scenes is Shirley Maclaine as Stiller's mum. At least her presence helped to maintain my minimal interest.