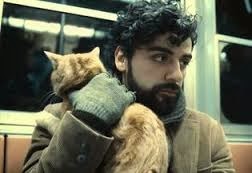 Any film by the Coens is an 'event' for me - and here, boosted by the presence of hot-as-hell Oscar Isaac in the title role, it was looking good. Unfortunately the frequent appearance of cat(s), of which I've been long since aware, transformed a lot of the eager anticipation into apprehension. As it turned out, apart from just one short but heart-stopping scene involving said feline, there was little to have been too nervous about, though that particular incident did cut deep. And because a cat keeps re-appearing at various points during the film it was not possible to let it go. But I accept that most of a typical audience won't be distracted by this as much as I was.

I never knew the name of Oscar Isaac till now but I see that he has had minor roles in two or three films I've seen (almost certainly without that magnificent face-fur), including that folly of Madonna's, 'W.E.'.

In this one he plays the surviving member of a locally fairly renowned singing duo, in Greenwich Village over a few days in the deep Winter of 1961. (Lots of smoking in this film, as there would have been around then.) Trying to further a solo career we see him singing in clubs and elsewhere a number of songs (largely pretty good, I thought), accompanying himself on guitar. (All Isaac's own singing.) Circumstances thwart his attempted progress at every turn. But his personal life is a mess as well. It's noteworthy that he seems to take more care of the cat he befriends and has to carry around than any beings of the human variety. Carey Mulligan ('The Great Gatsby', 'Shame', 'Drive', 'An Education'), of whom few of us had heard until a very few years ago, turns in another highly impressive performance, as his one-time relationship turned sour, for reasons I shan't divulge. Mention should also be made that one Justin Timberlake is in the cast. Also, the ever-reliable Coen Brothers'  frequenter, John Goodman, appears in a minor-ish role.

What I like most about Coen films is their quirkiness. This one has some deliciously funny dialogue, but the 'quirks' are sporadic rather than being sustained for the film's entire length, as they did manage to be in just about all of their films up to and including 'The Big Lebowski'. Since then, although their films have definitely still been worth a watch, sometimes two watches, I don't think they stand for the multiple viewings that their earlier films can bear with ease. If 'Inside Llewyn Davis' doesn't quite come up to the standard of entertainment that I yearn for them to return to, it's not so far short of it..............................7.5 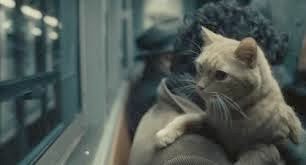