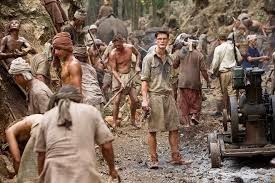 This is the third film I've seen on the trot in which human suffering is to the fore. At least this one, coming in at under two hours, doesn't have the near-epic length of either 'Mandela' or '12 Years', so that's a plus. Unfortunately there aren't that many more 'pluses'.

Based on a true story, (aren't they nearly all?), Colin Firth plays an English survivor of a Japanese-run POW workers unit forced to build a railway in Burma during WWII ('Bridge on the River Kwai' territory.) We first see Firth a couple of decades later approaching late-middle age, as a steam railway buff, chance-meeting Nicole Kidman in a railway carriage in England, Kidman having yet again to adopt an English accent, which she always does very well. In no time at all they're married, he having kept in the dark from her his periodic flashbacks to wartime experiences, reflecting his barbaric treatment by a particular one of his Japanese tormentors, who is also the group's only translator. The action switches back and forth between his Burma experience (the young Firth character played by Jeremy Irvine quite convincingly) and later complications with his wife who is desirous to know the truth of what happened though he is reluctant to reveal it. We do actually see the treatment to which he is subjected. (One more difficult watch!) He has also kept contact with other survivors, one of whom is unassumingly played by Stellan Skarsgard (who was one of Firth's co-lead players in 'Mamma Mia'!). Skarsgard's low-key and measured performance seems to me a bit at odds with how the film develops concerning his character, though it might have been intended to be a case of 'holding it in' as Firth's character was also trying to do. When Firth is informed that his Japanese torturer is also still alive he becomes intent on seeking revenge.

I haven't seen any of director Jonathon Teplitzky's other films, none of which is particularly well known. I didn't think this was actually bad, just rather not special enough for the story it tells. And if it hadn't been based on fact I simply would not have believed the heavy sentiment of the very final scene, though I concede that it might well have taken place.