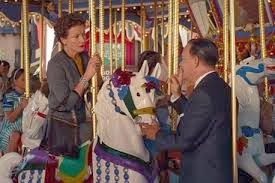 Very enjoyable film, with a broad spectrum of moods, high and low.
To prepare myself for this I re-read 'Mary Poppins' so as to be better informed on the subject matter, though my first read was only a comparatively recent 12 years ago.

This film tells of Walt Disney's personal tussle with authoress P.L.Travers in order for him to acquire the film rights to her book, and her direct and obstructive interventions to prevent his and his team's depictions of book and title character straying from the way she'd envisaged them. Her displeasure at discovering that the film is to be not only a musical, but is also to feature scenes of animation, are well and amusingly conveyed. It's a most interesting story which I did know just a little about, though my scant knowledge was further filled in by a rather engrossing BBC TV programme a few evenings ago about the real Travers.

Emma Thompson, though looking nothing like the real-life person she portrays, does a marvellous job, conveying Travers' querulousness and obstinacy to perfection. I've yet to see Thompson fail to give a stand-out performance, and here she does it again. (Incidentally, during the close of the final credits an audio tape extract is played of the real Travers arguing with the film team about her demands for the look of the film - and it's clear that Thompson doesn't exaggerate her manner one jot).
Tom Hanks, despite the make-up team's best efforts, still looks like Tom Hanks, but he does put real flesh onto someone whom, to those of my generation, always seemed a somewhat aloof, rather sketchy figure, and even just a bit questionable in his motives, though there was nothing we knew then or now to suggest that there was really anything shady going on - at least that what I felt even before we had Michael Jackson taking troupes of young kids to Disneyland.
Colin Farrell, in regular flashbacks by Travers to her childhood in Australia, plays her wavy-haired, very affectionate father whom she adores, even though she's aware of his drink problem. I don't think I've seen Farrell play such a kindly, soft-hearted character before, and he does it quite convincingly.

It's a very entertaining film (directed by John Lee Hancock), alternately comic and profoundly moving. It attempts to show us what made Travers 'tick' and from whence her Poppins character was derived. There may well be over-simplifications in the way this is explained but I can accept that as being part of the liberties taken as 'film-speak'. Besides, it's intended to amuse and/or involve its viewers and it does that admirably.

By the way, those familiar with the book will know that Bert (as played by Dick Van Dyke in the 1964 film) is only a marginal character who appears for about 8 pages - and he's not a sweep anyway! Likewise, Mr and Mrs Banks, the former of which is very prominent in the film, are even more peripheral in the book.

When I first saw the Poppins film nearly (goodness me!) fifty years ago, although I did like it I wasn't really as overly enthusiastic as most of my contemporaries were. I thought it seemed to date rapidly on screen, and when another Sherman brothers product, 'Chitty Chitty Bang Bang' came out four years later (also, of course, with Dick Van Dyke, though this time not from Disney) I rated it as being the superior of the two. Even now it looks quite fresh. It must, however, be said that for songs and music, 'Poppins' was the Shermans' real triumph. It's a brilliant score with very strong songs throughout. However, in spite of that and even despite these same brothers' songs for 'Jungle Book', I'd still make a claim that the score of 'Chitty' is pretty damn good.
But that's all beside the point for now. Not having seen 'Poppins' for something like thirty years it's more than high time for a re-viewing - and possibly for a re-appraisal, which could see my opinion being revised upwards - just like a kite!