Film: 'THE HOBBIT -THE DESOLATION OF SMAUG' (in 3D) 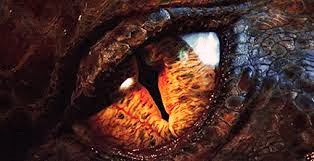 If spectacle is your bag and you think that it's enough to make or break a film on its own, you get that a-plenty here - both as natural landscape and as CGI-produced features and structures.
This 'middle one' of Peter Jackson's Hobbit trilogy, like the first episode, left me not caring that much about what was going on, because I simply couldn't follow it all. I've read the book twice (and LOTR at least five times). Not that it matters, as the film trilogy of 'The Hobbit' is so far expanded out of the source material from which it derives as to bear little relationship to it other than the title and the basic idea. But I'm not exactly complaining about that.

Ian McKellan and Orlando Bloom are two of the stalwarts of the franchise who turn up again here, joined for the second time by Martin Freeman as Bilbo Baggins, all joined by several faces particularly recognisable to British audiences.

I would be no less informed about the plot if there were no dialogue at all. A lot of that which there is, to me now sounds like pretentious doggerel , as though one has got to be 'in the know' to follow what's happening. Notwithstanding that, a lot of the action (with some brilliantly-created monsters of various species)  is good fun, chases galore, fights, battles, a bit of amusing slap-stick. I must give credit to the inventiveness of some of the antics - and the special effects cannot be praised too highly. On the other hand I once again experienced a few yawn-inducing longueurs, though I don't think there were as many as in the first film.

I'd already forgotten how the first part had finished, and I hadn't been interested enough to have my memory prodded. I reckon that by the time the final part mercifully appears I'll also have forgotten the 'cliffhanger' that concludes this part.

There's no doubt that this trilogy is turning into a major achievement, though in no way eclipsing the 'Ring' films, which I found much more entertaining, probably because I was more familiar with those books, and those films were an attempt, largely successful, to transfer that story to the cinema screen. 'The Hobbit' trilogy, by blowing it up so far, contains more of Jackson and his writers than it does of Tolkien, simply taking the latter's characters and creating an extended story for them. But that's cinema for you, which is fair enough.

If one is a great fan of this franchise then this film will have everyone one hopes for - interesting and varied characters (though only very few are female), no shortage of thrills with some astonishing camera work (particularly impressive in 3D). I've mentioned my reservation with the script but if one has a keener interest than I own maybe it is possible to make some sense of the gobbledygook.

I will be going to see the final part, though not with any great enthusiasm - just to be able to say "I've seen it!"
In terms of achieving a level of entertainment for me personally, I award 'The Hobbit - Part II'.............4.


Added one day after writing above:
As a result of Walt's comment (WCS) below, I referred back to the review I wrote for Part I of 'The Hobbit' in December 2012 and, to my deep embarrassment, find that, contrary to what I say above, I was fulsomely positive about that film, even going on to award it a 7/10 - and furthermore, saying that I was actually looking forward to its sequel! (Ouch!) But it would be unforgivably mendacious to alter the above review upwards (or downgrade last year's) so, with abject apologies for my inconsistency and faulty memory, I have decided, albeit red-facedly, to let both stand.