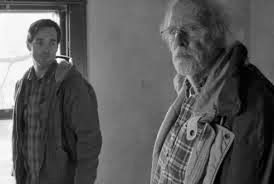 This has been an exceptional year for a high proportion of 'quality' films - and here's yet another to join that select number, which it does with ease.

Alexander Payne is justly gaining quite a reputation for directing really worthwhile films. In recent years we've had 'The Descendants', 'Sideways', 'About Schmidt' - and this latest one just about sets the seal on his being a name to watch and whose films can be anticipated with pleasure.

Bruce Dern plays the edge-of-senility husband and father who is taken in by an advertising scam which, he thinks, informs him that he's won a million dollars. He won't take persuading from his younger son (Will Forte, a name I didn't know, and not at all bad-looking) on the reality of the company's ruse, designed just to push their magazines. His son, unable to convince him, agrees to take him the two-day drive to Lincoln to enable him to collect the prize to which he thinks he's due. En route, circumstances force them to detour to stay a while in the small town of Hawthorne with his brother and wife, with their two burly, scoffing, adult sons (like Tweedledum/dee). One evening in a bar, despite his son's warning not to do so, the father lets out that he's on his way to collect his prize winnings, and it doesn't take long for word to get around. He not only finds himself surrounded by new 'friends' but old relatives and acquaintances come out of the woodwork, directly or indirectly hoping or excepting to join in his good fortune, including Stacey Keach who expresses his own expectation more like a threatening demand. All this to the son's frustration, even when he tells them all that his father is mistaken. They are joined in Hawthorne by June Squibb, Dern's dutiful wife who's ever ready with her acid tongue to cut anyone down, Dern not least.

Small-town America is brilliantly observed in this film. Hawthorne is a world where just about everybody knows everybody else - as well as their mostly being past retirement age. (The average age of the cast must be over 60, I reckon). The cast is all excellent. The script is on its toes - and mostly very funny. (It could have been condescending to the old generation but it isn't). And what a correct choice it was to film it in monochrome - so right! - and the big-sky, flat landscapes are breathtaking.

It's a very unusual storyline, and one which holds the attention throughout. It gives one heart to know that there are these little stories out there in someone's imagination and that we don't need to be ever subjected to banalities to entertain us.

If I did think that 'Nebraska' drooped ever so slightly near the end it would in no way prevent my giving it overall a hearty recommendation. It's another one that scrapes the ceiling with an..................8
Posted by Raybeard at 09:06