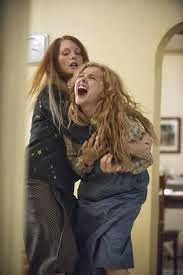 It would have been a tall order to expect anyone to better Brian De Palma's 1976 version of this very early Stephen King novel, which has an assured place in my 'All Time Top 100 Films'. This one doesn't improve on it, and by some margin, but it's still not without some merit.

I didn't know the name of either director Kimberly Peirce nor of the young actress in the title role, one Chloe Grace Moretz, though I now see that the latter did appear in 'Hugo' and 'Kick-Ass'.

The film is the tale of Carrie White who, on reaching puberty with her first period (quite 'publicly' at high school) finds that she has telekinetic powers, which operate both involuntarily when she's emotionally charged or, as she discovers, she can operate at will. She lives alone with her religiously-fanatic and near-demented, Bible-toting mother who is fixated on the notion that we're all born into sin, though women especially grievously so - and who strives to force her daughter to accept it.
Carrie is seen as something of an 'ugly duckling' at school, ridiculed by her female classmates and their boyfriends, when a jape is played by inviting her to attend the school prom at which she's to be cruelly humiliated in front of all.

Moretz, as Carrie, is several years younger than Sissy Spacek was for De Palma, and is therefore closer to being the authentically-aged girl which King had in mind in his story. I thought she carried it off very well.
Julianne Moore (one of the reasons I bothered going to see this) plays her part with most of her religious feelings pent up inside whereas Piper Laurie in the 1976 version was much more demonstrative in her loopiness. I have to say that I thought the latter was the more effective of the two, conveying better the histrionics we still see in current day evangelism.

In the pivotal scene at the prom, De Palma showed off a whole range of cinematic tricks - split-screen, filtered-out sounds, slow motion - all of which worked brilliantly. Some of these are also employed at the same moment by Peirce, though not the use of split-screen. When Carrie wreaks havoc with her revenge for the extreme prank played on her I think that this new film had no alternative but to try to outdo De Palma in spectacular effects, which it does.

Incidentally, I'd hoped that with additional sensitivities of a later generation (so I thought) the pig-slaughtering scene would be a little less graphic than in the earlier film. Unfortunately not so.

By the way, when the 1976 was first released, among the cast was a hitherto unknown name (at least to cinema audiences) of a certain John Travolta. It wasn't highlighted in the opening credits, his name being just included among the rest of the cast. Then, a few years later in the wake of the screen success of 'Grease', 'Carrie' was given a cinema re-release but now with the opening credits re-vamped to show Travolta as one of the  main stars, despite his role not being that big. I think it was on the lines of - "And featuring JOHN TRAVOLTA"!

I only saw this film because of Julianne Moore's presence plus the fact that there was a Senior Citizens' screening for just £3.50. If it wasn't that good it wasn't too much to lose - besides, I have to confess to being a bit curious as to whether it could compare with the earlier version. As it turned out, with no regrets at having made the effort, I give the 2013 'Carrie' a.............6.