A Christmas Special - The entire gang of toms is all here!

Here's something unique from me on this special day - a comprehensive listing of my current co-habitees and regular visitors.

First in order of seniority, my beloved Blackso. He decided to live with me soon after I moved into my current flat in 2000 - and he was more than a kitten then, so he must now be at least 14 years old, more probably 15 or even older. He was originally living in a house down the road, being one of half a dozen cats resident there. All attempts to get him to stay at his home failed, he insisting on living with me for some reason. His former owners have long since moved on, taking their remaining brood with them.
He's very affectionate, purring as soon as I pick him up. He always rubs his face against my nose, and he'll never miss a chance to jump into my lap. Always been healthy too, but scares me to death with his insistence of crossing the road to prowl around in the park on the other side, or to sit on the park wall where his friendly and trusting nature to everybody passing is terrifying, making him an easy prey to anyone who feels hostile to cats. But I do love him dearly, bless him!

My co-resident #2 is Noodles. Also left his home on this same road (but in the other direction to Blackso) to live with me, I think he ran away from there because the owners had two young daughters, maybe 6-8 years old at that time, who possibly just wouldn't leave him alone. (I was the same at that age, treating our then pets as toys, not allowing them time to rest.) As with Blackso all attempts to get him to return failed until his former owners just gave up. Noodles is much more stand-offish than Blackso, never demonstrative with any affection.. I'm not allowed to pick him up and he never jumps onto or stays in my lap, but in his current night sleep phase he's now sleeping in my bed beside my pillow, even purring as he settles down. I reckon he must be about 10 years old - and he's another healthy one.

Mystery cat 'Ginger' appeared as little more than a kitten about 5 or 6 years ago. I've no idea where he came from but he does now turn up here every day to eat and sleep. In the last few months he's put on a great deal of weight rapidly, more than his eating here would warrant, I think. He's now even bigger than Blackso. So whether he's eating elsewhere as well I don't know. Problem is that he's not been doctored - and his loud calling outside sounds like he's looking for a mate. Don't know what to do about him, giving me more worry than any of the others.

Patchy is the 'community cat' (probably aged around 12) who visits every day but, according to his owners (ardent cat-lovers who live just round the corner with their own family of them) is comfortable in any place where he can get food and warmth. If so, then this is definitely his favourite place of all. When he visits he takes over the entire place, even sitting at my open window to vet who comes in and out, refusing entry to 'strangers' with a snarl and a hiss - just like a personal club doorman! He's not afraid of anyone else - apart, that is, from one little intruder, an all-black visitor called 'Sooty', who terrorises all and sundry and is the only one who makes Patchy cower away. Thankfully, like Blackso and Noodles, Patchy has also been neutered.

And finally, Heckie (or Hector), next door's cat, now just over one year old. All play, inquisitive and bold as brass, he spends more time with me than he does in his own home, where he regularly finds himself locked out. So rather than wait on their window sill crying, as he used to do, he now comes to where he's learnt there's always an open window - and he scoffs food from everywhere and anyone else even while they're still eating. No manners at all! But he too hasn't been neutered even though I've mentioned it to his owner who says he will get it done. I hope so, otherwise more trouble ahead.

So those are the five who use my place as a main or second home. There are also several more pop-in visitors ever looking for scraps of leftover food that they can mop up, but never staying longer than it takes to do only that.

Until quite recently when I was ready to turn in for the night I'd go to my bedroom and find a cat or two curled up or spread out on my bed. In this case it was Noodles and Patchy and I found myself having to snake my body between them, trying to find a position that was reasonably comfortable enough in which to sleep, but sometimes getting warning growls from Patchy, threatening to lash out with his claws if I disturb him too much. 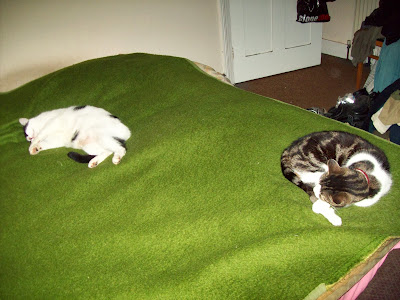 Pussies all over, and they've got me under their little paw-thumbs! Oh, it's a dog's life, it really is!

And the very 'bestest' of wishes to every single one of my blog readers from ALL the above - plus yours truly! (And that includes wishing you, Paul, if you're reading this. I've missed your valued comments on my recent posts. I do hope that you're okay.)
Posted by Raybeard at 05:14