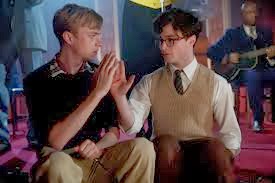 Quite impressive film of a pivotal segment of Allen Ginsberg's early life, from 40-year old director John Krokidias, whose first full-length feature this is.

There can't be many people who don't know the names of, not only Ginsberg, but also Jack Kerouac and William Burroughs, both the latter playing quite significant roles in this period of his life. But it's Lucien Carr, whom I didn't know much about (though I vaguely recognised the name) who was such a major influence on Ginsberg, and  I knew still less of the crime which exclusively takes up the final part of this film. It's Carr, along with Ginsberg, who has the lion's share of the film almost from the outset when the superficially callow Ginsberg arrives at Columbia University and Carr immediately becomes his mentor.  The latter's lack of respect for 'rules', both of authority and within the confines of poetry, is the catalyst which sparks Ginsberg to conduct himself in like free-thinking manner. Their mutual sympathies in this direction lead, naturally enough, to an intellectual relationship, rather than one that is physically expressed. But the major complication is Carr's previous, older relationship, who is unable to let him go. The downward spiral of the latter's desperation includes a most distressing (for me) incident involving a cat, which is going to echo in my mind for a long time, even though it's seen as being rescued before any harm befell it.

Daniel Radcliffe does a fairly good job as Ginsberg, though I personally would have preferred some actor who was far less known in this major role as it was not helped one bit by Radcliffe wearing spectacles throughout the film, inevitably resonating with another role. It needed me to take a great leap of faith to see him as someone who took so easily to various drug and drink indulgences. Maybe other viewers don't have that difficulty.

I thought Dane DaHaan (upper left) as Carr was brilliant, as was Michael C. Hall as his priggish but attractive (bear-like) older former lover - though I'm going to find it hard to dismiss the latter's action with the cat, film or not!
I was rather less convinced by Jack Huston as Kerouac, whose 'free-spiritedness' seemed a bit forced, and Ben Foster as a very dour, very knowing, young William Burroughs who, as portrayed here, didn't seem to accord with the much older Burroughs whom I know through his later books. (Must confess I've read very little of the works of Ginsberg and Kerouac).

I don't know how I managed not to have recognised Jennifer Jason Leigh as Ginsberg's mentally damaged mother until the final credits showed, but I didn't.

I really liked the style of the film, particularly for the first hour in its capturing the disparate nature of the characters' 'lawlesnesss of minds' - featuring jazz in thickly smoky atmospheres, taking in druggy effects. Once the crime is revealed the direction of the film becomes strongly focussed, and I thought it was slightly less successful in conveying what was going on inside the players' minds.

I don't know if many people who know nothing of the actual persons depicted in this film will have the motivation to see it. It's certainly not what might be regarded as 'mainstream'. But, all in all, any reservations that I do have cannot detract from my opinion that this is a good film..............7.