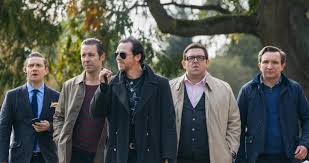 This is the final instalment of the so-called 'Cornetto Trilogy'.
I liked 'Shaun of the Dead' - and 'Hot Fuzz' a bit more than 'Shaun' (unlike some viewers). So I was agreeably disposed to watching this one - and, by and large, it delivered, though without quite eclipsing the earlier two .

Simon Pegg (whom I've always found particularly watchable) plays his most obnoxious character to date - a loud-mouthed, manipulative, heavy-smoking, me-first liar and general slob (and with hair dyed black into the bargain!) He rounds up four of his former teenage chums to complete again the pub-crawl they had started when celebrating their leaving school, they having lost touch with each other since then. The other members of this now middle-aged quintet are all names which aficianados of British film (and TV) will recognise - Martin Freeman, Paddy Considine, Nick Frost and Eddie Marsan. It's Pegg, of course who calls the tune and they go along with him, mainly for old time's sake rather than with any obvious enthusiasm. (The film's title is also the name of the final pub on their 'itinerary' - a double meaning with a hint of things to come!)
They start on their 'liquid journey' as intended but very soon it all takes a most bizarre turn. It's difficult to know how much more to say without giving away the direction the rest of the film takes. I was vaguely aware that something very strange would happen without knowing exactly what, and will confess that I was pleasingly surprised (well, a bit) when it did. As the film's still pretty new I'd better leave it at that - though very soon everyone will know, even those who don't see it.
For me, Freeman and Considine, though good actors, didn't seem entirely comfortable in their roles, but not to the extent of detracting from the fun. The major downer for me was the length - just 10 minutes short of two hours. Comedy, more than most other genres, should not overstay its welcome. It's more effective when closed down while leaving people wanting more, than to unnecessarily prolong its stay by engaging in an attempt to rationalise all what's been happening - especially when it culminates, as it does here, in the expected firework display of special effects. It's the old saying about the length of a film and diminishing returns.
But on the way there were definitely LOL moments and I did enjoy the start and, even moreso, the middle of the film.