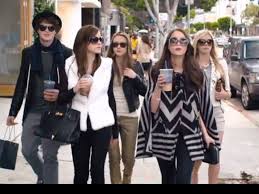 A not entirely uninteresting film, apparently based on a true story, of five odiously-attituded, pot-smoking, coke-snorting youngsters in L.A. who assume that the entire world exists only for them, and who have no compunctions about breaking into the homes of 'celebrities' (using that term in a very wide sense) such as Paris Hilton, Lindsay Lohan and Orlando Bloom, while they're away - and then rummaging through their lavishly and ridiculously overstocked wardrobes, making off with items of clothing, jewellery, handbags, watches etc to either keep for themselves or to sell for significant monetary gain. If this film really reflects the absurd ease with which they enter the empty premises - in one case by merely sliding open an unlocked and unalarmed glass door -  then the victim must only shoulder at least part of the blame her/himself.
I found this criminal quintet so dislikeable that, were I an advocate of c.p. (apart from in very specific and well-defined circumstances) I could cheerfully have given each of them a darned good slap. Had to remain to the end of this sensibly short (90 mins) film because I was yearning to see these loathsome juveniles get their richly deserved comeuppance, which they did, though it wasn't anything like as severe as I would have liked. (The Emma Watson's character's closing speech about how the experience has improved her self-realisation and knowledge is hilarious.)

Sofia Coppola has got herself quite a reputation for coming up with films which are off-the-beaten-track, and deserves great credit for doing so. But, because they are deemed not to have mass appeal, they usually get only selected showings, with the result that I have not had the opportunity to see more of her films than the few which I have. But those I have viewed are hardly ever boring, this one qualifying too.