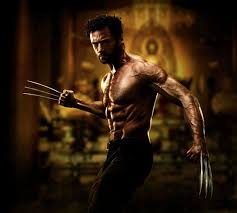 I haven't seen my favourite-looking actor of the present generation playing this role since I saw the original 'X-Men' film in 2000. I would have given this one a miss too but was smitten by seeing clips of him in the trailer and on TV, sporting those fabulous mutton-chop whiskers, which give him a more feline than a lupine appearance. I don't think H.J. has EVER looked as scintillatingly hot as he does in this. On the other hand, I don't recall seeing his engaging and totally disarming smile even just once during the entire two hours plus.

But that aside, this Japan-based, relentlessly serious, dull film was a waste of time for this cineaste. Loud sounds and visual tricks with the lavish use of computer effects do not an interesting film make.
We get an awful lot of seeing Jackman acting with all the stops out, showing his anguish and inner conflicts. I found it easy to empathise with his struggles but that was probably only because I like him so much. Otherwise I didn't find the story in the slightest way remarkable - though most of it being set in Japan was a further slight point in its favour.

Btw: I'd read a hint to stay for the final credits, which I did - unlike the rest of the audience, bar three or four. After all the acknowledgments have appeared, and rather oddly placed, there is a further couple of minutes of film of H.J. meeting up with two very familiar faces (you can probably guess who they are), which will be cause for diehard fans of the series to rejoice, though hardly for me.