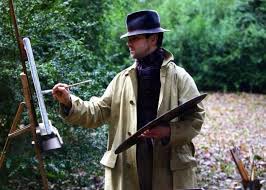 Moderately interesting true-story dramatisation of brief, tempestuous marriage of 'renowned' English painter, A.J. Munnings. (Who? Yes, me neither.)
Set in Cornwall in period just prior to WWI, the emphasis is on the painter's bloated sense of self-worth (mainly in painting women and horses), his put-downs of his wife's artistic efforts and of modern art in general, his philandering, and the doubts of his spouse-to-be regarding him even before the wedding day.
A love-triangle provides the engine for this tale, the 'interloper' being a soldier acquaintance to whom she is more attracted, with tragic results.

Dominic Cooper plays the artist effectively. When he appears in unkempt state he can provide, for me, quite an attractive 'piece of rough', though in this film that aspect of his presence is tempered by his often having a cigarette in his mouth, something I personally always find a put-off.
I didn't know any of the other main actors, though I was familiar with a couple of them in the lesser roles. Emily Browning as the female love interest is excellent. In fact all the acting is of a high order - but special mention must be made of the savagely beautiful Cornish coast. I only wish we could have had an extended scene or two there rather than fleeting shots. Photography was superb. (More than once, it got me thinking of Daphne Du Maurier's precocious masterpiece, 'Rebecca'.)