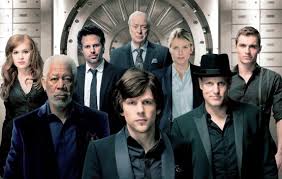 Confounding my own low expectations, having read a number of dismissive reviews (one critic calling it 'The Illusionist' for dummies!) I found this great fun.

Including a big-name, pleasingly watchable cast that takes in Mark Ruffalo, Woody Harrelson, Morgan Freeman, Michael Caine (somewhat underused, sadly), and not forgetting newer kid-on-the-block, Dave Franco, it tells of a quartet of illusionists who play 'Robin Hood' in stealing huge sums of money through bank heists as part of their act, and distributing it to more 'deserving' members of the public attending their shows. The F.B.I. and Interpol get involved early on and from then on it's a cat-and-four-mice game, with a twist practically every few minutes, until it comes to the big final reveal, in which I'd failed to foresee the eventual actual joker-in-the-pack.
Of course if one thinks deeply about what one sees I dare say little of it stands up to rigorous scrutiny. It's a very flash and slick film, with many jump cuts, some of them leaping so far that it would be futile to attempt rationalisation. Like a live conjuring act I think it's much more enjoyable if one doesn't keep asking "How did they do that?" but you just sit back and enjoy the ride. And what a ride it is, barely letting up on the viscerally-felt momentum from the very start.
It's made in wide-screen so it could be that much of the impact will be lessened when seeing it on TV or computer. But it's one of those films that takes delight in playing games with the audience, so on that score alone it ought to carry some of the fun over. Of course there'll be those who see it and who'll gleefully point out holes in the storyline, and for that reason will talk down the worth of this film. I wouldn't argue that there aren't any such lapses but all I can say is that it kept me entertained for the entire nearly two hours' length. So, being honest as regards to my own enjoyment quotient, and despite a risk of making some blog readers aghast, I award 'Now You See Me' a highly satisfying rating of ......8/10.
Posted by Raybeard at 06:28