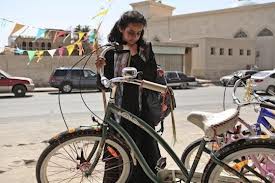 I'd really wanted to like this well-received film more, but my hoped-for pleasure was distracted most of the time, though it was not the fault of the film itself.
This is a film remarkable for being made in Saudi Arabia by a Saudi Arabian woman, Haifaa Al-Mansour, as both director and writer - perhaps a small but not insignificant indication that that essentially closed-society country may be starting to shed something of its insularity.

The main strand concerns the titular schoolgirl who sets her heart on buying a bicycle - in the first place in order to race her young boy pal, the two of whom share a playfully joshing friendship. Riding a bicycle is considered an unacceptable thing to do for a young girl (or, indeed, for any female) in this patriarchal society where the conduct of females is severely constrained.
The part of the story concerning the bicycle doesn't actually overwhelm the film. Several other strands are in play, mainly the girl's education where the (female) teachers, inside the school, wear westernized dress and hair-styles (as does the girl's mother at home) but when they go outside all have to be shapelessly black-robed from head to foot (girls with head covered), with just the letter-box slit for the eyes, and sometimes not even that. And it's this part that really got me distracted. There was nothing in the film we didn't already know about, but seeing how women have to conduct themselves, under pain of law, when non-familial men may be nearby got to me, especially as here when it's presented as an 'incidental' of no great argument in an otherwise quite admirable film. (When I get angry I'm unable to externalise it, even when there's the opportunity to do so. I always leave it seething inside which, I know, is unhealthy - and I found myself doing this during a large part of this film).
Compounding this, the schoolgirl, in order to acquire money to purchase the bike, decides to take part in a school competition for knowledge of and recitation from the Qur'an. I suppose this is not very different from my own schooldays when we were forced to learn the Catechism by heart and be tested on it by a (usually cantankerous) priest, ever eager to pounce on the slightest error. But seeing the same thing going on again with children at a vulnerable age brought up my anger once more. But, as I say, we all know it goes on right now in many parts of the world. (Incidentally, for years I've been reading a page from the Qur'an daily, as well as a chapter from the Bible - though both, I must stress, not for devotional reasons - rather the reverse, in fact.)

Another strand of the story concerns the girl's mother at home - glamorous, once she's discarded her outside-wear black robes - and the cooled relationship with her husband who's on the search to take a second wife. He is also 'westernised', (plays TV games) and actually does not appear to be an unreasonable guy, at least on the surface..

The film, I suppose, takes a predictable path - with one rather unexpected (to me) 'blip' towards the end.
But overall, it was satisfactory.
If I'd been able to detach my own feelings and just sit back and watch it dispassionately I might have appreciated it more than I did. But even so, it gets from me a quite reasonable, though unspectacular, score of...........................6.
Posted by Raybeard at 23:00