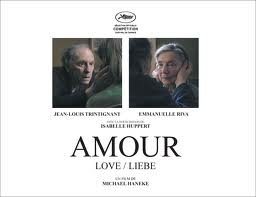 Michael Haneke is one of the small handful of directors whose every film nowadays is, for me, an 'event' - and this one is no exception. His recent films have included the chilling 'Hidden', 'The White Ribbon', 'The Piano Player' and, probably the most disturbing film I've seen in all the last 20 years, 'Funny Games' (I mean the Austrian version of 1997. Couldn't bring myself to see the recent American re-make. In any case, why did they feel the need to make one? Answer: Because a re-make in English would make more money!)

This new film, 'Amour', won the Palme d'Or at Cannes this year. 'Entertaining' is not the right word for it; 'troubling' it most definitely is. I knew it was going to be a tough watch - and one certainly does have one's emotions put through the wringer

Near the start of the film we see a long-term married couple in their 80s having breakfast together, talking normally. Then, out of the blue, the husband discovers that his wife has gone into a sort of trance, totally frozen and unresponsive. He starts to dress himself, resignedly, to go for help - then, hearing sounds from the kitchen, finds that she has returned to 'normal' - and she doesn't believe it when told what had just happened. It had been her first stroke, of course. In the next scene we see her returning home from a stay in hospital, now in a wheelchair but still fully compos mentis. The film chronicles her deterioration both physical (she loses control of one side of her body) as well as her mental slide, while her husband tries to manage care for her at home, at first alone, then with a nurse. He resists, among arguments, their daughter's earnest and well-meaning calls for her mother to be put in a home in order to get professional round-the-clock care.
It's harrowing to watch the descent into advanced senility and helplessness, all captured so gradually, seamlessly and believably. There are no awkward jerks in time which might have made it look contrived. A lot of the scenes are filmed using a completely stationary camera, viewing what happens like a detached observer. Towards the end there's a shocking event which I hadn't expected - part of which is left unresolved at the film's  conclusion, something which tends to be a feature of Haneke's works. He is not one to tie up loose ends.

This film got under my skin for two particular reasons:-
I am nearer in age to the sad fate (if it is also to be mine) of the woman here than nearly all of my blog-readers.
Also, my own mother, at about the age that I am now, suffered her first stroke, with a very similar effect, when she was in a restaurant with my sister and her husband. An ambulance had to be called. And that event probably signalled the start of her own physical (though not mental) deterioration over the ensuing years.

It's not a film to see if you want a 'happy' experience. But that doesn't mean I wouldn't recommend it. In fact I would do so, but only if you're prepared to steel yourself for a grimly moving, but also strangely satisfying, viewing. 7/10.