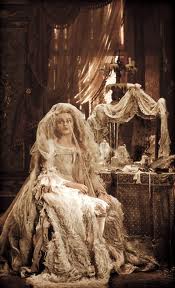 I had to fight hard against a strong resistance to liking this film for the totally unfair reason that I've got Dickens overflowing out of every single orifice by now, having (yawn!) re-read all the novels in this bi-centennial anniversary year of his birth. (Sorry, but I promise not to mention it again - at least in 2012.) But, pleased to report, it won me over.

This is the celebrated tale of a boy being elevated from his menial life in a smithy by a mysterious benefactor, to be brought up in London as a 'gentleman', among a largely odious bunch of Hooray Henrys. His required attendance on the enigmatic and embittered Miss Havisham who entertains herself by making him associate with the snobbish and spoilt Estella to whom he finds himself increasingly attracted - unrequited love, his see-saw of fortunes, revealed identities - all these are the ingredients of a quite masterful story, certainly one of the author's very best - and that really is saying something!

The film has a good momentum, fine location shooting, very atmospheric and a good cast among whom I would single out Jason Flemyng, totally convincing as Pip's uneducated uncle Joe Gargery.
Now, as to the ubiquitous Helena Bonham Carter, whom even I thought was far too young for the role of Miss Havisham, a character I think we all see as a senile, wizened beldam (and made even more of a substantial part in this film than she is in the novel)  - I heard an interview with her only last week when that very point was put. She explained, quite convincingly, that if one worked out her age from what Dickens reveals about her late in the novel, she would be unlikely to have been aged mid-40s at most. I've checked this out and I'm inclined to agree. H.B.C. suggests that we have become so dependent on thinking of the character portrayed in visual representations, films and TV adaptations as a brittle and hardened old crone that we take this as Dickens' vision too. (Mind you, if the author had got his own calculations wrong, it would be by no means a unique case!) I'm prepared to accept that what she says is true, and next time I read 'Gt.Exp.' I'll bear it in mind.

My only real complaint (yet again) is the insistent music which tries to dictate the emotions we should be feeling at any given point. But it's not a serious blemish on an otherwise very worthy adaptation..............7/10