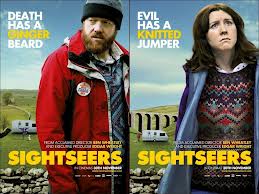 The second comedy film in two days to feature a series of murders as the raison d'etre of its black humour. And not only that, but both films have a significant, though not central, canine element. I enjoyed this one more by some way.

'Sightseers' has a small cast (entirely unknown to me), a clearly much smaller budget than 'Seven Psychopaths', lower ambitions, more restrained in execution and shorter than yesterday's film by half an hour - and it all works a treat!

A youngish London couple go off for a caravan (and 'bonking')  holiday to Yorkshire and the Lake District. Immediately on reaching their first destination they encounter a litter lout and, being given the finger, he silently snaps inside - running the chap over 'accidentally' and killing him. She is shocked and he feigns remorse - but he has now been bitten by the 'killing bug'. When he gets irritated by another couple's pretentiousness he disposes of the guy - and she steals their dog to replace her own pet, which had met its end in a brief, grisly flashback, by accident a year previously. But she has now also been 'infected' by the same murder bug. They continue on their travels, each of them now putting an end to those people to whom each takes a dislike. (There aren't, in fact, that many of them). A lot of the humour arises from their shared nonchalance at killing which was not at all premeditated when they'd embarked on their travels. They both retain a sense of detachment from the consequences of their killing spree though she develops an additional 'nasty streak' culminating in a slight twist in the very closing moments which, despite being not entirely surprising, leaves me with an uncomfortable after-taste. Unlike the film I saw yesterday, this one manages to maintain its darkly comic tone almost right through to the end.

The two main characters make an engaging couple who certainly have their laughs together. However, also with regular tiffs and sulks, we are still on their side from the very start, and can smile along at their outrageously criminal behaviour. (Shame on me!) Incidentally, the killings, though brutal, are not depicted quite so egregiously as in yesterdays '7 Psychos'.

It's a very 'English film' and I fear that there's a parochial appeal to it which may not find a ready market outside this country. But one never knows - such unexpected turn-outs have happened before. I certainly hope it does in this case.


Btw: I saw this film on my first visit to Brighton's newest cinema - a 2-screener above a theatre mainly for stand-up comics. This particular auditorium is a very plush and ultra-comfortable 90-seater with, proportionally, a huge screen. Pity that I was one of an audience of only five. But it was an 11.15 a.m. showing - and it's early days yet so here's hoping that word is yet to spread around. I do so want it to survive, despite the extra calls which will be made on my own wallet.
Posted by Raybeard at 08:33