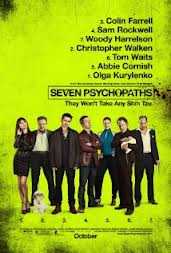 I had almost decided not to see this film, on the grounds that it featured the kidnapping of dogs in order to extract rewards from their owners. I was afraid we were going to be shown the depiction of animals in distress or suffering, even if they were not so in real life. In the event my concern was misplaced.

I was eventually drawn into going, not just by the high-quality cast list, but it also being director/writer Martin McDonagh's first film since the well-above-average 'In Bruges' of 2008.

Colin Farrell plays a heavy-drinking, Hollywood screenplay writer who already has the title of his next project, the name of this very film. All he's got to do now is to write a story to fit it. His live-in chum, Sam Rockwell, offers his own suggestions and more. They search out likely candidates to fit the bill - and unwittingly find themselves having got involved with the criminal underworld. Here the film deliberately (I assume) mixes fantasy with reality. We don't know if certain scenes, a lot of them extremely violent with bucketloads of gore (though none is lingered over), happen in reality or are part of his creative mind's invention.

I thought it all started splendidly and in highly original fashion. In fact for about the first hour it was, despite, the gruesomeness, very funny indeed, appealing to those who recognised its skewed sense of humour - which, I dare say, some will just not 'get' and may even find tasteless. But I liked it a lot.
However, as the film progressed it got steadily heavier and more philosophical in tone, which I found a pity. By the final half hour it had all but shed the light and whimsical touch with which it had begun, descending into an unfocussed hodge-podge of ideas on death, vengeance and heaven knows what else. I don't know if this was the path the film maker wanted to take but that's the way it came over to this viewer. In a film shy of two hours length by just a few minutes some judicious editing, particularly in the second hour, could have paid dividends.

One particular issue troubled me - as it also did in 'In Bruges'. The homophobic use of language - the words 'fag', 'queer', 'homo',  even 'gay' - all applied as insults with the implication that the person being addressed will recognise them as hurtful epithets indicating inferiority. This was also the context of their use in 'In Bruges', my sole complaint about that particular film. However, they are not used here very often - maybe half a dozen times. (Just what is it with McDonagh that he feels the need to write these words into his scripts? )  Actually there is also in this latest film a pejorative single use of the 'n' word by the Woody Harrelson character - and the person he's addressing repeats it back to him, but with sarcasm.

Oh, and by the way, there was indeed a small number of dogs featured, though this is very much a lesser aspect of the tale. None of them were seen to be in any discomfort - and though one had a gun put to its head as a threat to its owner, it worked out okay - at least for the dog.

It's a film which starts out very well, and to which I thought I could be awarding a high mark. It certainly did have some marvellous comedic moments but which, unfortunately didn't sustain their initial frequency. As an entity, therefore, I really can't give it any more than a still reasonably respectable................6/10