Film: 'THE HOBBIT - AN UNEXPECTED JOURNEY' (in 3D) 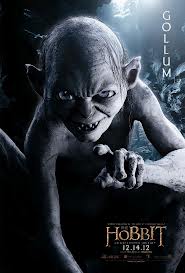 I see from the IMDb site that, as at now, over 60% of people who have seen this film give it a 'couldn't be better' score of 10/10. I wouldn't go that far by quite some way, but I certainly did enjoy it as superior entertainment.

I went to see this more as a 'dutiful' viewing rather than with great enthusiasm. Not that I dislike the books, far from it, but I don't belong to the hordes of avid fans of the characters as portrayed in both the four novels and on screen. Also, not being quite as familiar with the source material of this particular film than I was for the 'Rings' trilogy, it probably helped in that I hadn't a ready recollection of what was going to happen next - notwithstanding the fact that this film and its two forthcoming companions greatly expand the tale as written.

There was obvious padding out, unusually and needlessly, towards the start of the film. Of course the link with its sequels-in-time had to be done, but for some time after that the scene-setting did go on more than I needed to see. But, when that was over, I found the film getting progressively more interesting. The scenery throughout  is absolutely ravishing, I'd claim even more so than it looked in the 'Rings'. Perhaps C.G.I. was used for part of it, particularly in superimposing figures onto a particular landscape, but most of it looked authentic - and quite breathtaking too.

The high point for me was, as it was in the previous films, the appearance of Gollum. What a magnificent job Andy Serkis and the computer chaps have done in creating one of the most memorable characters ever to appear on the cinema screen. His appearances alone (not very long in the totality of the film), were worth the price of the ticket. Compulsive viewing indeed.

I liked Martin Freeman as the young Bilbo Baggins (one can imagine easily him ageing into Ian Holm) - and just about all the other characters were well up to the demands. Particularly pleasing to see Christopher Lee back, even for just a very few minutes, after cruelly being excised out of 'Rings 3'.