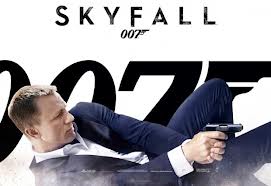 I don't think anyone who sees this would deny that this is one of the better of the series.
In the obligatory, pre-credit chase sequence I was initially a bit put out by the filmic cliches - fruit and veg from street market stalls being crashed into, with the produce flying all over the place (it is Istanbul, after all!), a gun having run out of bullets being thrown away with a mini-second of irritation....But these are minor nags in the overall scheme of the film.
Positive aspects of this film for me was that the arch-villain (played with mincing, deliciously-campy malevolence by the excellent Javier Bardem) as well as Judi Dench's 'M', are given far more screen time than either of these roles have had in any previous Bond film, 'M''s considerably so. The new 'Q' was a brave and unexpected move too, and a good one. Also, I don't think a previous film of this series has been set so much in this country - London (a large part of it being underground - I say no more!) and in the remote Scottish highlands.  (I now don't give away any further 'spoilers'!)
Actually, there's not much more to say. I found it quite exciting without it gripping me tautly. There's no doubt that after Dalton's Bond (who wasn't exactly bad) followed by Brosnan (who was actually pretty good), the series since Daniel Craig took over has been given a much needed shot in the arm - and all three of his films now have been of a superior standard (though some may disagree about 'Q of S').
Yes, for a spy thriller this one is distinctly above par - though maybe it's just me in feeling more a detached observer of the on-screen antics rather than a sense of being really involved in them.
I'd better not say more as many will be going to see this, surely the most eagerly anticipated film of 2012, and I don't want to risk marring anyone's enjoyment by my own personal opinions.