New film: 'THE PERKS OF BEING A WALLFLOWER' 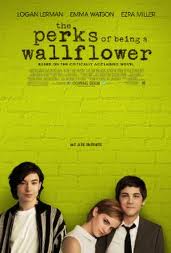 Wish I'd done homework before venturing out to see this one. As it was, I was swayed not just by generally favourable reviews and its getting surprisingly good British box office, but nearly half the voters on IMDb have given it a scarcely credible 10/10 - and the average to date is 8.5. "Why?" is the question!
My jaw dropped when, within the first few minutes, I was assailed by a succession of some of my biggest film turn-offs - teenage angst, American high school lippy pupils, including the 'regulation' bully-figures, and an (American) football game, though the latter was mercifully short. Add to the mix a flamboyant gay character, so keen to define himself, practically exclusively, by his own sexuality, inter-teenage rivalries in 'romance' - and I'm just bored by talking any further about it. It did pick up a little for me after the first half hour, but that's not saying much.
The most recognisable name to most people would be Emma Watson (Harry Potter's friend, Hermione) though there is also Paul Rudd - as well as Joan Cusack in a very minor role.
It's one of those films that most make me feel my age. I just cannot relate to anything here. Clearly, a lot of people think it to be a wonderful film. They are welcome to that opinion. They may well be right, though I can't for the life of me see why. Anyway, I'm more than three times as old as the target audience so I accept it wasn't made for the likes of me. My mistake in going.