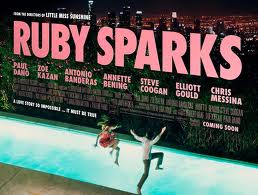 I wasn't sure about paying good money to see this. What I'd read about it, coupled with some negative reviews, didn't enthuse. But go I did - and, to my surprise, I actually liked it.

The idea is that a young nerdy-looking writer, after producing a hugely successful first novel, gets writer's block. He starts to dream about a 'perfect' young lady (the eponym of the film's title) which he befriends in these dreams - and he then decides to make her the subject of his next book. Soon after he starts writing about her she suddenly materialises in physical form, as someone already living with him as partner. After his initial astonishment he soon discovers that whatever qualities he writes about her she then manifests. There would have been scope here for sexual exploitation of her by his using imagination when anything he wants comes true. But though there certainly is exploitation (which is really the heart of the story), that's not quite the way it develops.

It's a good, original film (at least I hadn't met this situation before) and it has a pleasingly sharp script. There are a couple of mushy sentimental moments but they aren't lingered over, apart from the very end with a weak 'tidy-up' epilogue which, for me, diminished a bit of what had gone before.
The cast was good - with a number of bonuses I hadn't expected. I hadn't realised that the wonderful Annette Bening would have a modest part as the writer's mother. Antonia Banderas, as the father sporting a grizzled beard, looked hotter as a 'Daddy'  than I've ever seen him. In fact I didn't realise it was him until I got back home to record my vote on IMDb site and I saw the cast list. But even hotter still, Chris Messina, who looked only slightly familiar to me, playing the film's third major character as the writer's (unlikely) married brother with a 'playboy' mentality. Two more dissimilar-looking bros it would be hard to find - he replete with sizzling male sexiness, his brother writer with all the forceful appeal of the colour beige.