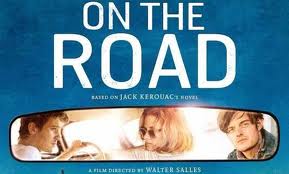 For the most part I didn't find this very engaging. I haven't read the novel but the film was pretty much what I expected - marijuana/alcohol-induced hedonism with occasional excursions into polysexuality, constantly driving above the speed limit, and the usual 'what-a-lark!' adventures of stealing from stores. The men never really argue among themselves, unlike the women who, after being 'used' tend to be cast off with little ceremony.
Although I did feel like nodding off now and again,  there were a few moments where it livened up, though it sometimes had nothing to do with the film - as in the brief appearances of Viggo Mortensen and the even more fleeting Steve Buscemi.
I missed being a contemporary of the 'beat generation' by about 15 years, but even if I had been I would never have got onto that particular wavelength. It was probably being well into my 30s when I even first registered the name of Jack Kerouac. Even now it all seems a bit alien to me. Perhaps others who were rather more rebellious in their own young adulthood can identify more with the characters portrayed here, and hence appreciate the film more.