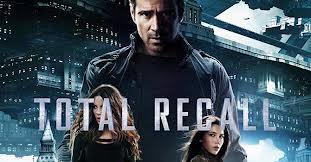 What a rowdy film! (Should have taken some cotton wool to plug me lugs!) Moments of repose, such as there are, are few and far between. It's 95% chase and fights, with much 'impressive' bullet-dodging by all the human characters, as against the multitude of robots, who are not much inconvenienced by the ammunition-sprays anyway!
The question everyone is asking is why bother to re-make a film which was so successful comparatively recently? - well, at least in 1990. I thought the Arnie/Paul Verhoeven original was pretty good, notwithstanding the robot-like star playing a human being - which one might well describe as 'acting out of character'. But of course, a significant part of today's audience wouldn't even have been born when this early version was released.
I quite like Colin Farrell - well, physically anyway. For me he filled the main role satisfactorily without being especially memorable. I haven't read the Philip K.Dick short story on which the film's idea is based and expanded - but I believe that this new film is closer to the author's original concept than the earlier one.
It would be disingenuous if I was to be harsh about this film because, frankly, I did enjoy it, something I wasn't expecting after reading two or three reviews which were decidedly less than enthusiastic. I've just been to the IMDb site and given it a rating which is actually higher than the average of those several hundred who were there before me, and that doesn't happen very often.