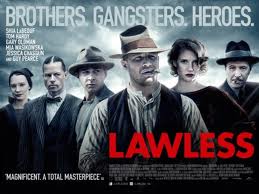 I felt some apprehension about going to see this film. It has been described (quite justifiably) as 'extremely violent'. Normally when such a reputation precedes a film it usually takes it to be something especially significant and/or notorious for me to fork out money to satisfy my curiosity. But in this case it was the starry cast, featuring some of my favourite present-day actors, which I couldn't resist.
But what a disappointment in seeing the chamelionic Gary Oldman given star billing when he has barely two minutes of on-screen time. What happened? Did most of his contribution end up on the cutting-room floor? Very good though he was, his part would hardly have been worth a credit as a cameo appearance!
The always-better-than-good Guy Pearce is first class here too, playing cold, heartless and demented right up to the hilt. A truly scary portrayal.
Tom Hardy, fast gaining a reputation as being a significant positive contribution to every film he appears in, didn't let me down either.
On the other side of the reputation scale, Shia LaBoeuf (here, disconcertingly resembling John Cusack now and again) is often dismissed as bland and uninspiring. To give him his due, I thought in this film he was a bit better than that.

The film itself, I found, reasonable enough, though I did have to look away from the screen a few times, being forewarned about certain scenes and my mentally tricking them off on a list.
This story of fraternal boot-legging and their clash with the corrupt law in the American depression period is sufficently absorbing  - and superbly photographed - though I did feel the family tale and a concurrent running romance were rather over-balanced by the several violent scenes. Those audience members who are more inured against the depiction of violence than I am may not have found it so.

When I see a film, on coming out, I ask myself if I regret having spent money, time and effort in having done so. An opinion of 'maybe/maybe not'  earns, predictably, a mark of 5/10. This is definitely on one side of it, though I do think that others may give it a higher score. However, in terms of the degree of my own personal enjoyment, I award 'LAWLESS'  a fairly comfortable ...............6/10.