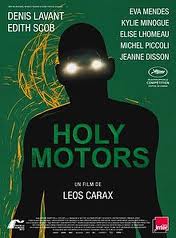 Kylie's appearances on the big screen are such a rarity that I don't know if I'll be around the next time it happens.
That was one of two reasons I wanted to see this. The other one being was that the premise seemed fascinatingly imaginative and bizarre.

This French language film features a Monsieur Oscar being driven around Paris in a stretch limousine, mostly during the course of one night. Every so often his elegantly but severely be-suited, more-than-middle-aged chauffeuse tells him of his next 'appointment' - at which he changes his identity with the help of all the make-up paraphernalia at hand in the vehicle - and he drops into the middle of each of a sequence of nine or ten stories. One doesn't know the whys and wherefores which led up to the situation as it is when he joins the story, all of which are also left unresolved. The stories are of varying length, one or two having a few, but not too many, chuckles - and most with a touch or rather more than a touch of the surreal. After a while I just decided to sit back and go with the flow - and to stop my mind asking questions.

Some segments worked quite well for me while others were less successful. One that stays in my mind is when Eva Mendes (wordless) is featured in a kind of 'Beauty and the Beast' story-let - and it's every bit as puzzling as the others.

Kylie appears about 2/3 through in one of the more substantial segments, lasting about 15 mins, speaking in French - except for a very downbeat song in English. It's a rather grim little tale.

I'd like to be kinder to the film. While I do like the bizarre and for that reason will often be keen to see such films twice in order to understand a bit more which I didn't get the first time round (e.g. the films of David Lynch), I have to say that this film as a whole didn't endear itself to me so much that I'd be eager to sit through it again.

Btw: We get to know at the end that the film's title refers to the name of the company owning a whole fleet of these limousines - presumably each one containing identity-changing passengers? Maybe, maybe not.