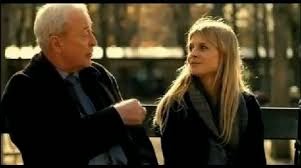 This had an American release towards the end of last year under the title 'Last Love', so we Europeans get a delayed release - not a good sign for a German film in English with some subtitled French dialogue.

Michael Caine, appearing in nearly every scene, gives a sturdy performance (some reviewers disagree) as a retired, recently widowed, American professor resident in Paris. He's slowed down by advancing years, and dotes continually on the memory of his deceased wife, who makes occasional appearances in his imagination.
His mundane, spiritless life is enlivened by a chance encounter and subsequent acquaintance with a 20s-something dance instructor (Clemence Poesy) who, recognising his solitude, invites him to come along to her classes (cha-cha and line-dancing). This development could have been cheesy but it doesn't really come over like that.
An event brings Caine's son and daughter over from America (Justin Kirk and, in a small role, the impressively versatile Gillian Anderson), the former in marriage difficulties, who witnesses the, by now, deep platonic friendship between his father and a girl possibly a third of his age, and has serious misgivings about the latter's motives in getting so close.

One cannot avoid mentioning Michael Caine's attempt at an American accent, so self-consciously forced and so far off the mark as to be distracting. Accents were never his strong suit - even English ones from outside London. It makes me wonder why director and writer Sandra Nettelbeck didn't make the character an Englishman, or got an American actor to play the part. However, it's always a pleasure to see Caine on screen in what has got to be the sunset of a deservedly illustrious career.

It would have been easy to have turned this film into a sentimental mush. There is sentiment, certainly - the story demands it. But for the most part it manages to avoid being totally overwhelmed by mawkishness.
It's a needlessly over-long film - and approaching the final sections something happens which made me sit up, saying - "Oh no! Really?" This not only weakened the drama but seemed to provide an excuse for adding a further 10 minutes or so onto a film which now ends up being close on two hours long. A stronger finished product would have emerged by having had the courage of applying scissors.

There are a a few unnecessary postcard-y views of what everyone already knows is one of the most photogenic cities in the entire world. (He can even see you-know-what from his flat!)