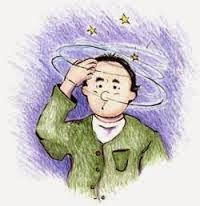 The plan is/was to go to Brighton today to see 'Deux Jours, Une Nuit', but since yesterday afternoon been feeling strangely dizzy. It started yesterday morning when I felt light-headed rather than giddy but it's changed since then. Had hoped that a good night's sleep would clear it but, although did get good sleep, felt much the same way since getting up, having to occasionally hold onto bannister, radiators etc in order to negotiate my way safely about. Feeding five cats simultaneously  (my two residents plus three regular visitors) first thing this morning was tricky and slow (sorely testing their non-existent patience), carefully avoiding treading on paws or tails, and getting a clawing into the bargain should I fail.

I've got a doctor's appointment for next Wed and am loath to do anything before then as this year I'm in danger of getting a reputation for time-wasting - nor do I want to go to A & E yet again for the same reason.

Don't know what brought it about. Don't think it's connected to my fall, now two and half weeks ago. Maybe something to do with the medication for high B.P. and diabetes (type 2) - but why so suddenly? Checked on the internet and the possible causes of dizziness are so many it's useless to make a guess, which could well be off the mark anyway.

The last thing I need is yet another keeling over, most dangerously outside on the road again, and most especially before my arm has completely healed. So don't know whether it's worth risking it just to see a film for which there'll be another chance to see next week anyway, even though I'd prefer it done and out of the way.

So at the moment thinking it'll be wiser to stay indoors unless going out is unavoidable, at least until realising the hope that it might clear.
Posted by Raybeard at 00:25