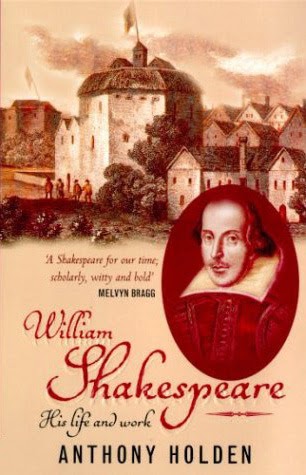 I only finished reading this book less than an hour ago - and I feel like I'm in the afterglow of a most satisfying meal.
It's a 1999 work which has been broadly well-received, though not without carping from some quarters and accusations of needlessly stirring controversy in others.
I have to say that I found the amount of detail in it quite staggering, yet it could in no way be described as a 'heavy' book, even for those who are not 'Bardolaters' like myself (for which I thank Holden himself for that word). The text throughout is constantly alive, weaving together in chronological order a lot of what I did already know and a great deal that I didn't.

Holden gives short shrift to the still widely-held misconception that little is known of the writer's life. He tells us that, in fact, more is known about his life than that of any of his contemporaries, save for his playwright friend, Ben Johnson (as well as, one assumes, Queen Elizabeth and King James). It's true that he doesn't say all that much about his wife, Anne Hathaway, even though she is just adequately covered. But he says more about Shakespeare's children than I've read in any other source till now.

Holden bats away with ease the theory that this man (whom some still claim may not have actually existed at all!) did not write the works himself, but that his name was a 'front' for another writer, of whom there is a goodly handful of candidates. I've never been an ardent subscriber to this theory, and when one has placed in front of oneself the considerable evidence to show that Shakespeare was indeed the scribe, such alternative postulations seem more purposely and perversely contrary than in being soundly argued.

I'm less convinced by Holden's curt dismissal of the notion that Shakespeare was bisexual, or even gay. (Well, I would, wouldn't I?). He acknowledges the arguments of Auden and Wilde (among others) on the 'pro' side - pointing out, for example, that Wilde puts his belief of the writer being gay into a fictional story ('The Portrait of Mr W.H.') rather than having the courage to write it into a factual article. But, on my first reading of this book, Holden seems to base his entire argument for the Bard being heterosexual on a single sonnet, number 20, one of the most overtly sexual, which praises the young man's physical looks yet ultimately disdains his (the young man's) possession of a penis ("To my purpose, nothing"). I've read extensively on the sonnets (I do, after all, revise my recitation of one of them consecutively every single day) and more than one commentator, far more learned than I, or even Holden himself I'd aver, points out that this particular Sonnet, even putting aside all the other 125 of the 154 in the cycle addressed to the young man, does in fact reinforce the idea of a physical attraction on the part of Shakespeare, perhaps unconsummated, at a time when, after all, all homosexual acts were a capital offence i.e. punishable by death.  I think Holden ought to do better than, failing any indisputable evidence that S. was gay, fall back on the default possession of him not being so. I think all we can say with confidence is that coming up to the 400th anniversary of his death, it's most unlikely that anything new not known on the subject up to now is going to appear. The best we can say is that even if the door on the subject can be near-closed it will never be shut completely.

But that's the beauty of this book. It provokes thought and confrontation and encourages cross-consultation. It doesn't leave ideas lying lifeless on the page. We can disagree with them if we like. It's our prerogative.
I've learned a lot from perusing these 320-odd pages, often pausing for thought. In my monthly reading of one of the plays, which I've now done every single month without a gap for about 50 years, I'll remember his comments about this work or that, and it's bound to affect my thoughts as I read on, reaching ever deeper levels of profundity which has made Shakespeare one of my gods (along with Bach and Beethoven) ever since being in my teens.

With the book fresh in my mind I'm already looking forward to a re-read. In fact I now want to read it again at least once every year in the time I've left allotted to me.
Heartily recommended.