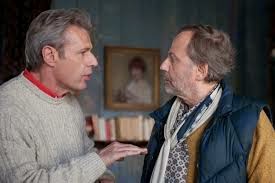 Reasonable enough, without being anything to get too excited about.
The title in both languages refers to the play 'The Misanthropist' which Lambert Wilson (here on the left), a celebrated TV actor playing a surgeon in a hospital drama series, wants to put the play on stage, with himself playing the title role of Alceste. He wishes to coax Fabrice Luchini out of acting retirement to appear in the secondary part and visits him in his home on the Ile de Re (a small island off the French Atlantic coast, I've looked up). Luchini has deep reservations about resuming acting after so many years, his vacillations taking up most of the 'action' and, while he's deciding, the two of them start rehearsing the play in the expectation that he will eventually agree to do it, though Luchini would prefer to play the main part himself. A romantic dimension with a degree of rivalry between the two of them is provided by the chance appearance of an Italian divorcee.

The film's main interest is the squabbling between the two men and their relationship blowing hot and cold, sometimes with mutual admiration, at other times with exasperation about each others demands - a sort of 'odd couple' scenario.
We see them a few times cycling out together on the island but it mostly takes place in the retired actor's home where he lives alone.
There were a few amusing situations but nothing to cause more than a mild chuckle. I got the impression that the film (director: Philippe le Guay) thought it was funnier than I and the audience found it. Some of the play's rehearsed  extracts are quite significant and I got the impression that there seemed to be a resonance between the parts they were playing and the two men in real life, so it might help to be more familiar with the play than I was.

Btw: Shortly after coming out of the cinema in Brighton I took one hell of a heavy fall on the roadside, right among the touristy throngs, the worst tumble I've taken in many years, splitting my lip and hurting left arm - the former still bleeding a little and the arm still so sore that it's painful to move it, it now being three hours since it happened. A group of people came out of a nearby cafe to render assistance, helping me to a nearby outside seat, providing wet tissues, glass of water and making enquiries as to whether they ought to call an ambulance. I refused the latter, of course, but as to their concern I am most grateful and think I made that clear. Only hope it all doesn't feel as bad in the morning as it does now, there being another film on the cards and tomorrow's time of screening is by far the most convenient for me to attend. But, oh, how I hate attention - especially when it's something so publicly 'belittling' as this was.
Posted by Raybeard at 08:59