Film: 'INTO THE STORM' 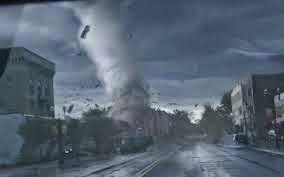 Okay. Should be able to get this out of the way in a few sentences.
If you like visceral thrills this is for you. The effects are consistently nothing less than breathtakingly impressive. During the film's course (Director: Steven Quale) I had leisure to muse how well this would have fitted into the series of all those disaster films of the 1970s, only at that time one was wondering how they 'did it' (though it often showed). Now we do know how they 'do it' and the effects are as seamlessly perfect as one could wish.

As to the flimsy storyline, mainly centred on a group of storm-chasers, well it's only an excuse in order to display the astonishing visual pyrotechnics (and sound too) which is the film's raison d'etre, and consequently one doesn't have a chance to sympathise much with any of the characters. It's not helped by a dull, predictable script, though the people caught up in the conditions are not intended to be much more than ciphers. Richard Armitage, as a college vice-principal is particularly colourless. He has a teenage son who resents his father's seeming lack of interest in him. The rest of the cast is a motley collection, including a couple of regulation, irritating, cocky characters who consider themselves untouchable and whom one wills to get their comeuppance - quickly.
A chain of tornados hits the town of Silverton, Oklahoma, progressing in strength and ending with the awesome spectacle of funnels combining to create the monster of them all.
I was half-expecting at the film's end to hear some sermonising words, or a final caption, on facing up to the perils of climate change, from which, it seems, there's practically no escape now, but we were spared that.

I actually wasn't going to see this film but Ron @ http://retiredindelaware.blogspot.co.uk/ enjoyed it in the manner of a sort of fairground ride (some of which which he'd been experiencing in Toronto around the time) so I went along myself - and that's precisely what it's like. If it was to be rated for special effects alone it must score highly, but it's one of those disposable films with little substance, and I don't think it's pretending to be any more than that. So as an all-round experience I award it a fairly lowly, but not entirely dismissive.................4/10
Posted by Raybeard at 08:43