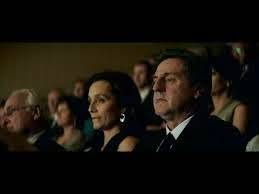 I'll declare at the very outset that I did find this Philippe Claudel film most satisfying. Usually when I'm at odds with the majority of critics and viewers I am the one who's marking down. For a change this time my contrary opinion is a positive one.

Daniel Auteuil, who used to be a regular in French films of the 1980s and 90s (at least those which reached these shores) makes, for me, his first appearance since the impressive and disturbing 'Cache' ('Hidden') of 2005. He plays a neurosurgeon married to Kristin Scott Thomas, the latter seeming to appear more often in Gallic films these days than in English-speaking ones. Nothing at all wrong with that. KST is a delight to watch in any language.

Their long marriage (with a 30-year old son) has not quite gone stale yet, though it's certainly gone off the boil. When having a casual drink he is approached by a barmaid who tells him that as a girl she was operated on by him. He acknowledges her identity and thinks no more of it. Then he starts to receive, anonymously, bunches of red roses, first at work, then also at home and even one left on the bonnet of his parked car. He is, of course, troubled by who it could be. Then, through an accident of happening to be at a certain spot, he jumps to the conclusion that it's this very girl who's the one who is stalking him, and he makes a public scene - with him apparently being shown up as mistaken. (Or was it an error?). The roses deliveries continue and he finds himself becoming obsessed with the girl, by this time he assuming she has nothing to do with the mysterious flowers. She responds to his advances until he finds out something about her which deeply concerns him, but he carries on their friendship.
Meanwhile KST is growing suspicious that there's something going on in hubby's life which he isn't letting on about. Her attempting to get him to talk, as well as her unspoken 'reaching out' to him, is well conveyed. They only seem to be together when doting on their infant grand-daughter. Meanwhile, another complication is KST's sister with mental problems which gets her 'institutionalised', so already nerves are frayed.

I've seen the film described as 'slow-paced'. I not only didn't find this but I actually thought events were moving forward with some urgency - at least until about half an hour before the end when I was fearing that the narrative was in danger of becoming static. And then something happens, totally unexpected and devastating, which requires one to re-assess all that has happened before that point.

I've no major criticism at all of this film. Acting is good and solid by all parties throughout, and it's well-directed and beautifully shot. It certainly drew me in and it got a very low tally on my watch-checking count....................7.5