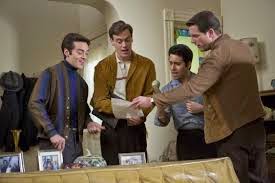 My expectations were not high for this film, but I'm happy to report that I liked it.

I'd heard that director Clint Eastwood's evident greater interest in the back story (of the Four Seasons, with lead vocalist Frankie Valli) than in the songs which feature along the way, would tip the film in the wrong direction; after all, most people who pay to go to the stage show (not seen by self) would be looking forward  to seeing the songs performed - and the same goes for the film.
I was therefore apprehensively thinking that the songs might be presented rather mechanically in hum-drum fashion. In the event they carried me along with ease and got my adrenalin pumping gleefully.

John Lloyd Young plays the diminutive leading role with considerable appeal. The tale follows Valli from pre-fame criminally-involved days in New Jersey when he was a naive youngster drawn into a world he didn't seem to naturally inhabit; then the discovery of his extraordinary falsetto voice, one of the first to recognise it being avuncular figure Christopher Walken with connections to, and influence with, 'the mob'; the forming of the singing foursome and their being publicised by their theatrically gay record producer (Mike Doyle).
Valli's marriage (three daughters) predictably hits the rocks through his long absences from home and his philandering. There's in-fighting within the group which includes the brain creating the songs, Bob Gaudio (Erich Bergen) and fallings-out. One can  guess the story even though it's based on fact. It's really par for the course for nearly all rock groups, though in the 1960s no one suspected this was going on. I have to say that until seeing this film I knew nothing at all about the Four Seasons other than their hits (about a dozen Top 20 records in the U.K., including one Number 1 in 'Oh What a Night')

There's quite a bit of talking to camera by various characters - I can just imagine on stage that at that point he is highlighted by a spotlight while the rest of the stage is darkened, or (please not!) the characters 'freeze' till his address to the audience is complete.
There are one or two very fleeting homophobic slurs, though if there'd been none at all it would have stretched credibility for the period in which this is set.
I wonder how many of the audience recognised a milli-second's appearance of Eastwood himself on a b/w TV as Rowdy Yates in the western series 'Rawhide' (of which I was an avid fan), just before he made it big in cinema with the excellent 'The Man With No Name' trilogy.
I thought Eastwood's direction was rather better than just efficient, finding the film absorbing throughout. It's maybe a bit more dramatic than one might expect in a 'frothy' musical but not to its detriment. I did, however,  regret that a few of the songs weren't performed in full or were largely talked over. I should imagine that this doesn't happen in the stage show as, I think I'm right in saying, it's become one of those musicals where the audience gets to its feet for the songs and joins in - which, if so, would be the sole reason for my not wanting to see it in a theatre - an infuriating and spoiling distraction. However, other songs are given their full head - and when they're done straight like that they really are marvellous.

I'm old enough to remember the first time I heard the first of the Four Seasons' British hits on its release ('Sherry' in 1962) and I recall thinking then "What a strange sound!". However, becoming familiar with Valli's soaring vocals, I quickly got to like their records a lot. This film does, I think, Valli and the group justice...............6.5
Posted by Raybeard at 09:20