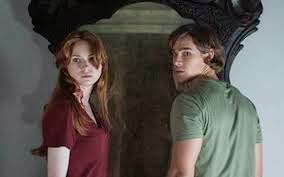 Why the pretentious title? 'Oculus' = 'eye' in Latin; now meaning a round window, especially a window in a dome. Is the title referring to an 'Evil Eye' or a 'Window into an evil world'?  I can only conjecture.  I didn't hear the word being used at all in the film. It's a bad choice, and its subconscious resonance with the word 'octopus' adds to the confusion.

It sounded intriguing and the film has been quite well-received, so, with the intention of experiencing some good and, nowadays, rare escapism into the horror genre, I gave it a go. Unfortunately, though not bad, it didn't really live up to hopes.

Mike Flanagan's film features a cast entirely unknown to me, running two time sequences in tandem - the earlier one of two children with their parents, the adult couple becoming increasingly influenced by a malevolent antique mirror, and then thirteen years later with the same children trying to exorcise that same piece of furniture's malignancy, which has caused the deaths of several of its owners and more over two centuries in England and in America.
The younger boy in the earlier story was put away in a mental facility for a killing. Now, on his release, his sister is out to prove that the deed was brought about by the mirror's baleful influence and that her brother was not really the one responsible. She also intends to destroy its power for good.
I might mention in passing that both the early-time family and the now-grown brother and sister each have a pet dog. I was dreading for either or both of these animals to come to nasty end. Although it's a minor plot-spoiler, I'm relieved to report that such does not transpire.

The film is deadly serious throughout, which I think is a mistake if one is going to be graphic with the horror effects as this is at times, though there's nowhere near the OTT blood-and-guts visuals we've all seen in other films. The horror films of old (especially in the 'Hammer' films of the 1960s and 70s) where there was gore by the buckets-load had a way of winking at the audience which made the horror more telling. Here, where the incidence of visual horror rises as the film progresses it's played straight and earnestly, with the result that it just gets silly - and I found myself smiling at the film rather than with it, as we used to do with those oldies I mention.
Another error, I felt, was to have the later-time two young adults, particularly the young man, watching and witnessing himself as a boy, even sometimes in the same frame. It just seemed to weaken the effect of the horror.
Some of the shocks are quite effective - far better than the ones where we are jumping in our seats not at what's on screen, but rather at a sudden loud thump on the soundtrack, which always annoys me as I see that as 'cheating'.

The most genuinely disturbing films of recent-ish years for me have been The Blair Witch Project' (which, I know, has had people wondering what all the fuss was about, but I found chilling) and 'Paranormal Activities' (the original one). I've only seen both on the cinema screen and even now, all this time later, the memories of each of them send shivers up my spine. They both work because they are under-stated. The clinching 'pay-offs' in both films don't happen until the very final frames, and they both leave more questions than answers. In fact no answers are supplied at all. But, by heavens, I do find them disturbing.
In 'Oculus' the pitch of horror climbs steadily until, towards the end, it seems to assume that the more we actually see on screen the more terrified we'll be. It's not true. Flanagan ought to have kept it reined in right to the very end. Then it would certainly have worked better, though I bet that a lot would have complained that they didn't get their money's worth!