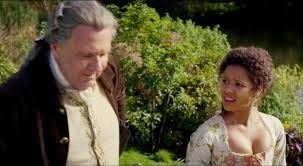 If historical costume romances are your bag then this is for you. All that's missing in this very properly-spoken, sentimental tale (complete with swooshy strings) of English high society in the late eighteenth century is a ball, for which I give thanks. Otherwise I found this a stifling affair. I do, however, give it top marks for its unusual, fact-based story.

In Amma Asante's film, Gugu Mbatha-Raw plays Dido Belle, the half-caste daughter born out of wedlock, of the great nephew (and a black female slave) of the country's Lord Chief Justice (Tom Wilkinson). Left at this aristocratic home by her loving father, who has to leave on a sailing expedition, she is accepted as a child of his own blood by his great-uncle's family -  a bit reluctantly, not so much because of her colour than that of what 'society' might think. Although she is treated as an equal in familial surroundings, when visitors arrive she is required to make her presence less conspicuous, such as not joining the gathering for meals. The Justice's own similar-aged daughter, meanwhile, has taken this new 'arrival' to her bosom and they remain firm friends throughout.
Complications arise when both Dido and the daughter 'come out' in society and are wooed for marriage purposes, Dido having been smitten by a liberal-minded, anti-slave clergyman's son whom Tom Wilkinson does not think suitable. There is other competition for Dido's hand, some of it well-meaning, some not.
A parallel story is the Lord Chief Justice, who is also liberal-minded to some extent but much more pragmatic, having to deliberate and rule on a case involving the deliberate drowning of some slaves being transported as human cargo, their murder being in order to claim insurance on their 'loss'.

I liked the fact that Dido seems to have caught some of the haughtiness of the aristocratic family she has been brought up with. It would have been so easy and predictable to have made her a downtrodden, sympathetic figure from the start, but she isn't. She's quite sassy with a mind of her own.

The film is handsomely mounted, well shot and quite convincingly acted. The presences of Emily Watson, Miranda Richardson, Penelope Wilton and Matthew Goode all helped to make it a bit more bearable than it might have been.
It all ends with the legal ruling and verdict, swimming in sentiment underscored by full orchestra, which I found hard to take.