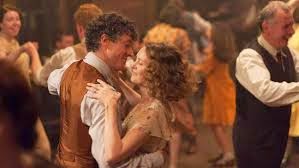 Ken Loach's filmography is a distinguished one, going right back to the widely admired 'Kes' of 1969 and covering notable contributions such as 'Hidden Agenda' (1990), 'Riff-Raff', 'Ladybird Ladybird', 'My Name is Joe' and 'Ae Fond Kiss' (2004). This one is another well above-average offering, though I must admit that though I've not disliked a single one of his films that I've seen I don't think that any of them would qualify in my list of 'all-time greats'.

Set in the aftermath of Irish independence and civil war in the late 1920s and early 30s thus rural-set story ("inspired by" true events rather than "based on") tells how a politically headstrong young man (Barry Ward, excellent) sets up a village dance hall as a community adhesive where society activities have heretofore been largely determined by Church and state, the latter still with residual English landlords. Much to the Church's disapproval, in addition to promoting 'lewd' dancing he brings in records of 'corrupting' American music, which his stern and humourless, elderly parish priest denounces as 'jazz' (actually more swing-time) and - shock, horror! - with negro voices, instead of good, wholesome, traditional Oirish music! The authorities, the state (in the form of police), colluding with Church, try to bring an end to his 'unholy mission'.
Jimmy himself is politically radical, accused of being a Communist (which he doesn't deny), and is the subject of attempts to have him deported for his dangerous political activities.
Drama is heightened by friction between his supporters and the English landlord on whose land the dance hall is built, as well as by his romance which he attempts to prevent being doomed to separation.

It's an engaging tale, not boring in the slightest, though I was concerned that, like several of Loach's past works, it might get a bit politically-preachy - and it does lean towards that, especially in the film's second half. Otherwise the historical setting looks exactly right, with just about all the acting being of high or very high standard - and the dance scenes are toe-tappingly effective and uplifting. (I could have done with seeing more of this).

Just a small point: Would an Irish Catholic priest of advanced age be so free with use of the swear-word 'bloody', particularly to another, younger priest, when he must surely be aware of its likely derivation? Perhaps he would, I dont know. It just struck me as sounding incongruous.