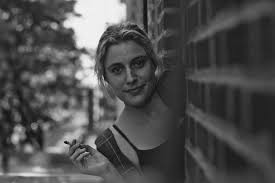 (The film's rather odd title is only made clear in the very final shot, but it's not material to the content.)

I was moderately entertained by this New York-set (in b/w), crisp (86 mins) tale of a 27 year-old, apartment-flitting, aspiring-to-be-professional dancer (refusing to read the contrary signs), whose only constant is her female friend (deeper than her matter-of-fact male relationships), at least that's what she thought until friend Sophie makes a life-changing decision without telling Frances, whose sense of betrayal leaves her temporarily stunned. (Btw: Quite a lot of smoking going on this film, by an almost uniformly young cast.)

In the title role Greta Gerwig, whose name I didn't know (and looking remarkably facially similar at times to Chloe Sevigny) does a pretty good job.

Comparisons have been made with some of Woody Allen's films, but I think that's unfair as it then becomes a judgment of the success, or otherwise, of emulation. However, when it comes to entertainment value there's no doubt in my mind that Allen, at his best, is way superior to this particular film. Even when Allen is not on his best form, his dialogues have a quality of hooking me early on. They have an intellectual 'clout', even when largely improvised, which this film lacked. The script here, though hardly vacuous, had only occasional flashes of memorable character interchange.
Another comparison I've heard mentioned is with Mike Leigh's hugely enjoyable 'Happy-Go-Lucky' in which the marvellous Sally Hawkins plays the irrepressibly optimistic (some might say "maddening"), giggly lead. That was a film I really warmed to and loved. Not so much here. There is a slight resemblance of that film's main role to this Frances' character but it's only a passing one. (I'm not even sure if director/writer Noah Baumbach would even have been aware of Leigh's film.)