Film: 'A FIELD IN ENGLAND' 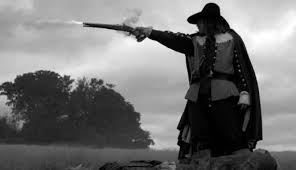 Despite my fondness for quirky, even bizarre, films, this  oddity really perplexed me.

Opening simultaneously in certain cinemas, on DVD, and on TV last weekend (at a time too late for me to watch), this monochromatically-filmed tale of weird goings-on during the 17th century English Civil War is set entirely in the open, in the titular small area, played by an all-male (largely little-known) cast of actors, representing a motley handful of army deserters who are captured by an alchemist and his accomplice, and who are then forced to search for an assumed buried treasure.
A number of grisly, violent actions are scattered throughout the film, though I don't think of them any lasts for more than one second of screen time.

The special weirdness of this film is manifested by occasional unexplained statuesque poses, a small degree of religious fervour, hallucinatory episodes bordering on horror (which never actually materialises and which, I take it, originates from the ingesting of wild mushrooms found), and manifestations of physical resurrection. It's an odd mix indeed.
If it hadn't been for the tightly scripted and precise dialogue (commendably clearly delivered) I'd have thought at several points that the film-makers had 'lost the plot' and were pushing haphazardly onwards not sure themselves of what was going to happen, none of which is finally resolved.

I really liked a particular previous effort of director David Wheatley. His 2011 'Sightseers', (a quirkily amusing account of serial-killing!) finished in my Top 10 of that year. For that reason I was looking forward to this, especially since the reviews I've seen have been generally favourable. But I just didn't 'get it', though I'm willing to concede that the fault may be mine.

A disappointment, then, though not a grave one. Still interesting enough to hold the attention, I dare say that others may well get more out of it than I did...........5.