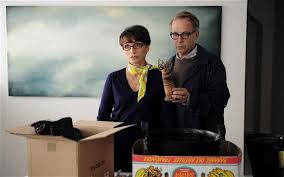 A delightful, light-touch, mystery-comedy from Francois Ozon who seems to have a growing knack of coming up with films of intriguing, original storylines which lodge in the memory long afterwards.

Fabrice Luchini plays a rather dull and bored schoolteacher whose interest in his work is suddenly aroused when one of his teenage pupils presents him with a particularly well-written essay of how he has wheedled himself into the family home of a classmate under the pretext of helping him with his maths difficulties. He ends his composition with the words "A suivre" (to be continued), picking it up later with what turns out to be a whole series of instalments, hooking not only the teacher but his art-gallery manager wife, the always marvellous Kristin Scott Thomas (who now seems to be appearing with more regularity in French language films than English). He shows her the first essay, ostensibly because of his pupil's superior use of language and very soon her curiosity is also aroused. She too is drawn into the drama of what the boy is up to, each instalment leaving on a 'cliff-hanger' as the pupil describes how he begins, not only to snoop around his friend's house whilst leaving him to do maths exercises, but also to eavesdrop on the conversations of the latter's parents. The teacher and wife are constantly wondering if what the pupil says he did actually happened - and so are we. Then the teacher gets so involved that when there's threat that the boy might have to stop helping his friend he intervenes to do something borderline criminal so that he'll be allowed to carry on as before. It takes a serious turn or two as the intruding youth gets ever-closer to the mother, both physically and emotionally, but I think these are justified as they serve to point up the amusing parts by giving the story some shadow in its light-hearted approach. And it all ends in really the only way it could, leaving me with a satisfying, though appropriately incomplete, smile.

It's a film that doesn't go for the really big laughs or the grand gestures. Maybe those which puzzle the audience into wondering the difference between truth and reality have become very voguish now, but this one plays it with a neat, confident touch.
As in several of Ozon's films there is a bit of gay angle to part of the storyline (here quite slight), though it does afford the 'excuse' for a quite sudden and gratuitous, very brief homophobic put-down, something I always find particularly wounding, though maybe that's just me.