A slight preamble. Just before going into the cinema for this film I heard on my Walkman (yes, I still use one!) the news of the death of Thatcher. In the small-screen auditorium, before the lights went down I announced it to the audience of 25-30, which certainly got them buzzing - just as the film was about to start (heh heh!) - though I hadn't intended for that to happen. 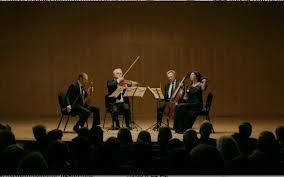 
A film depicting, as far as I know, completely uncharted territory - at least I can't think of another which plays the internal personal dynamics of a group of players in a classical chamber group. (It's a subject I've often pondered on - even while a concert which I'm attending is progressing!)

The background against which the story is set is the string quartet's preparation for a concert including the  late C# minor Quartet of Beethoven Op. 131. (I was a bit afraid that the familiarity of the music would be distracting, especially when it is broken up into small segments which just suddenly stop. In the event it wasn't really so, though it might be an advantage in not knowing this particular work).

The engine of the film starts going early on with cellist Christopher Walken (in a perfectly understated role) announcing that he is showing symptoms of the onset of Parkinson's and that for the sake of the survival of the quartet the other members ought to start thinking about finding a replacement. Hoffman and Keener are  married with a violin-playing daughter and skeletons start tumbling out between the three of them. Meantime Mark Ivanir (a name I didn't know before, but quite a hottie with his facial scruff) tries to maintain his position playing lead violin against the growing resentment of Hoffman (here a big, blonde, bearded bear of a figure) who wants a turn at being first violinist. A couple of affairs take place and, when discovered, reactions are predictable, though understandable. There's even a scene of high farce, where the comedy is quite unlike the remainder of the film.
I generally liked it. The film isn't consistently on an even keel. There are hysterical emotional outbursts, but it surely wasn't intended to be all on one contemplative level. Acting from all members of the cast could hardly have been bettered. But I think I was most impressed by story's originality of conception, and that is indeed a rarity these days.
The final scene in the concert hall was almost unbearably affecting. It was so well executed that it made me very nearly forgive some of the possibly misplaced soap-opera emotional excesses that had gone before.